Pollarize architecture at a glance

X-posted from the pollarize.me blog

Pollarize was bourne out of a 54 hour hacking stint at Startup Weekend in March 2012. The Thursday night before that weekend, I thought about the various tech I knew and wanted to have a good idea how to kickstart our hack before putting pen to paper on the Friday night. The decision was made: Pollarize was going to be a Spring MVC web app running on an Amazon EC2 instance. I was going to worry about the database later, and maybe get away with using an in-memory map or something for the data.

Come Friday night, I felt a bit different. Why not learn something new, I thought. Besides, AWS might be a bit clunky for a weekend hack. And I’ve heard good things about the Play! framework, and the v2 was released just a few months before. 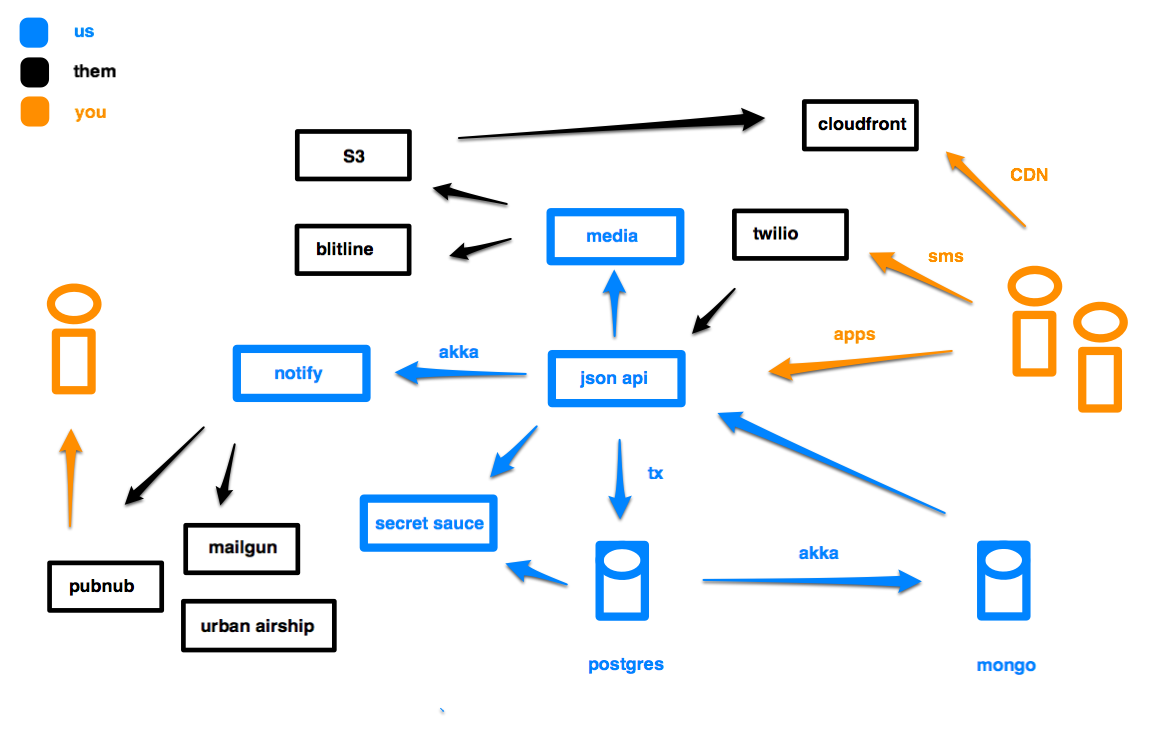 The core app is a lightweight Play! 2.0 (Scala edition) web app which exposes a JSON web API, and it makes transactional writes to our operational Postgres database. Most other (unimportant) write operations happen via fire-and-forget calls to other modules via Akka. The IDs for these data is pre-chosen, so subsequent calls will be idempotent.

All writes to the operational database is fired off to a MongoDB actor, which serves as the read-only cache for API reads. The data in MongoDB is already in the format the caller will consume, so it is extremely quick. The cache can be rebuilt asynchronously with the click of a button.

The media module accepts profile pictures and poll images, and we use Blitline to get them into our signature circular format (and different sizes), and then we store the results in Amazon S3 and expose it to the world via Cloudfront. If you have any image processing to be done, definitely give Blitline a shot: they’re very helpful and the API is a lot of fun to play with.

Notifications is triggered via an Akka scheduled job in the case of poll expiry, and via events in the case of registration, password reset, poll creation from people you follow and follow notifications (yes, we’re a tiny social network). In general we use email via Mailgun’s simple API, Pubnub for web users, and Urban Airship for our mobile users.

We played with some other tech but those were chucked out for various reasons. Redis is awesome, and we used it initially for our social network, but in our case it was just another piece of your architecture to worry about. Our social network now happily lives in our operational database where it belongs. One day, if Postgres buckles under the graph, we’ll reconsider. Then there’s RabbitMQ. It’s beautifully stable, and has a very good monitoring plugin, but once again: it’s one more thing to manage, and besides, Akka mailboxes will suffice for now. You bet your PaaS we’re using Heroku

Heroku has been great for getting started. Have an idea? Code it, commit, push, et voilà. No worrying about builds, deploys or anything like that: one less operational hassle to worry about when you’re building features. However, we do have a chunky $5,000 AWS credit, and I’m slowly but surely creating Puppet manifests for all our components (Vagrant has been great for testing this locally), but this is still a nice-to-have for the size of our user base, so I’m really just hacking at this in the in-between moments.

So, there you have it. Our architecture at a glance. There will be some more detail later down the line. In fact, I’m already drafting a Play! best practices, jotting down everything I’m learning along the way. Questions and comments on the back of a postcard.