These are my notes on week #2 of the Introduction to Deep Learning Coursera MOOC.

Video #1 basically sets up some notation for showing how a matrix input maps to one bit of information (1 or 0, true or false, i.e. whether a picture is of a hotdog or not).

Video #2 shows how Logistic Regression trumps Linear Regression in the sense that the latter will output values in the range negative to very large (>1), which is not what we want for binary classification. Instead, Logistic regression “clamps” the output to 0 <= y^ <= 1 using a sigmoid function. “y hat”, i.e. y^ will be the prediction of y, the “ground truth”. 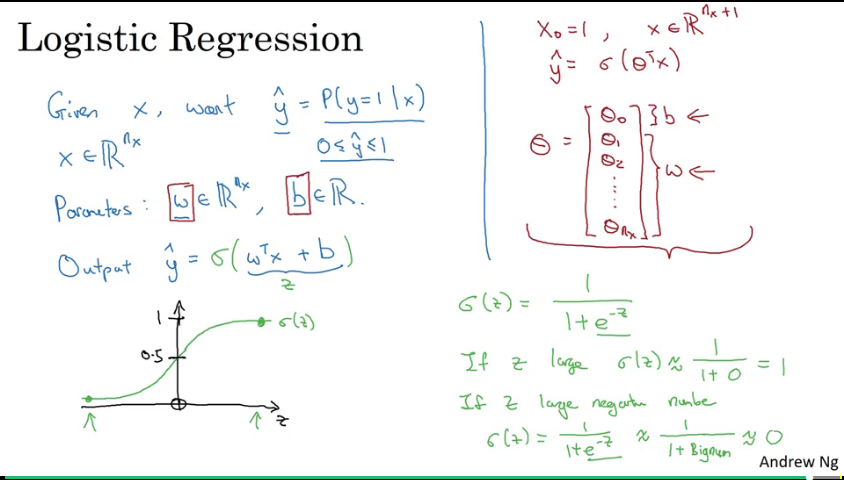 Video #3 explains the cost function needed to train parameters w and b. Square error doesn’t work well as a loss (or error) function, because no global minimum can be obtained. It makes gradient descent not work well at all (your “ball” gets trapped in the first “hole” as it rolls down the hill). We want a function which ends us up with one convex basin, not a squiggly line (many basins).

The cost function measures how well you’re doing over the entire training set. 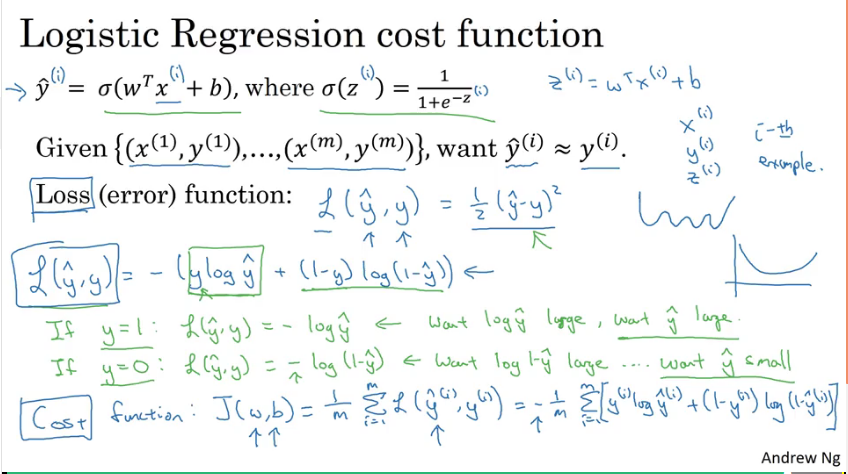 Video #4 discusses gradient descent as an “optimisation algorithm” shows how logistic regression can be used as a tiny neural net.

Gradient descent is your “ball rolling to the bottom of the basin”, or final a local optimum for w. It shows how taking the derivative (or the slope) of the curve finds the optimum where the slope is 0 (a flat line underneath the curve). For the multi-dimensional case where we’re finding w AND b, it would be the plane under the basin. 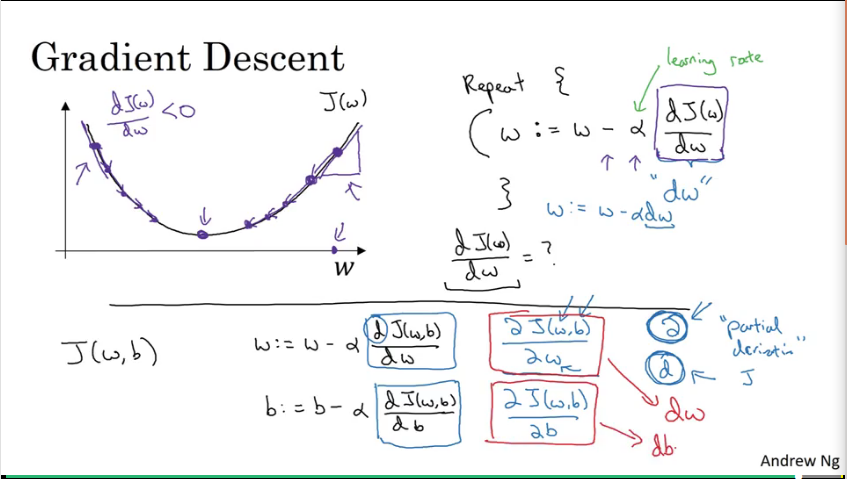 Video #5 is just a calculus refresher.

If you are in need of a calculus refresher, I suggest supplementing these two videos with 3blue1brown’s channel or Khan Academy and also pay attention to the “chain rule”.

During this course, you’re not expected to derive the derivatives - all the ones you need are provided, or otherwise consult the derivative lookup tables in any calculus textbook.

Video #6 talks about the computation graph which explains why neural networks are organised in terms of a forward pass (for the output of the network) and a back propagation step (for the gradients or derivatives). It shows an example of working through a computation graph to compute the function J (the cost function). 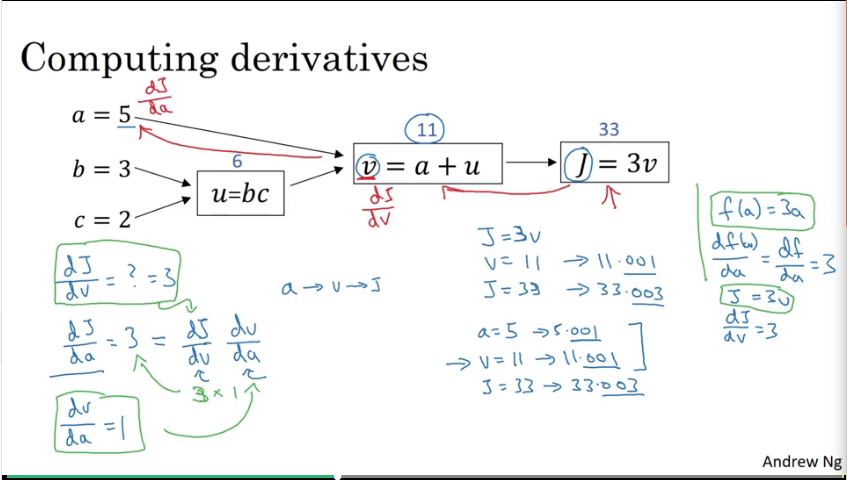 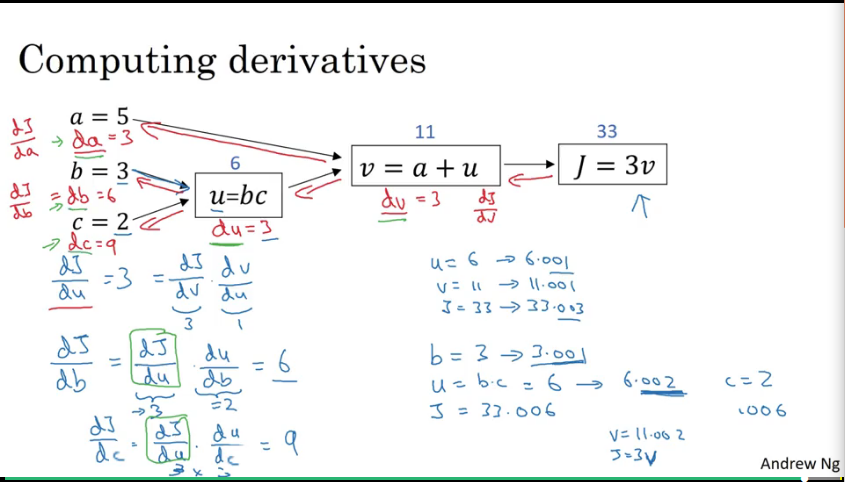 I like how this video uses a decimal (0.001) change to show how J’s decimal changes, and all-in-all building up good “number sense” for derivatives and forward- and back-propagation.

Also, in Python code, the variable representing “the derivative in terms of VAR” would just be written in code as dvar, e.g. da. 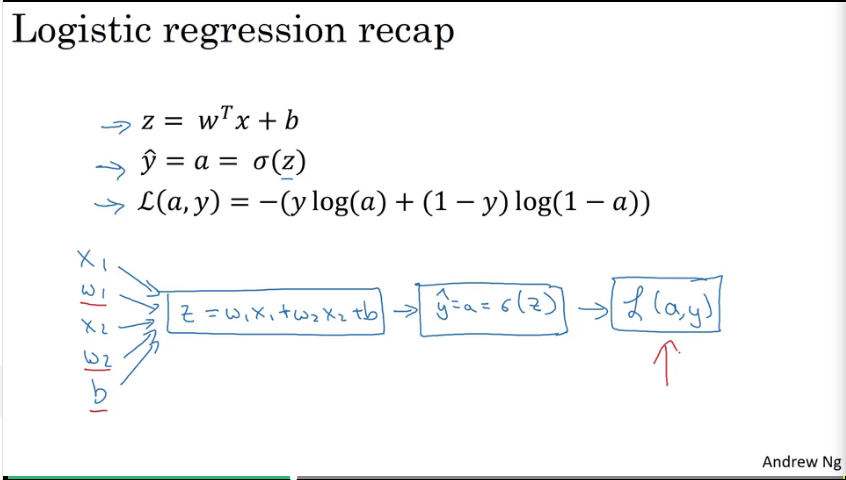 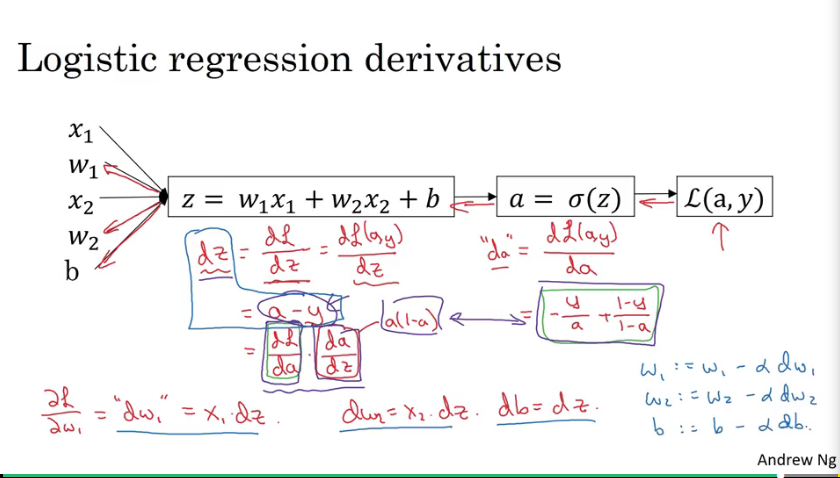 Video #9 takes the previous single example and applies it to a training set of m examples. (reminder that the cost function J is the loss function L over m examples.)

Ng scribbles down some pseudo-code (for two features: dw1 and dw2) and makes a note about using for loops with large data sets, and how the expensiveness of it can be circumvented by vectorisation, which is discussed in the next video. 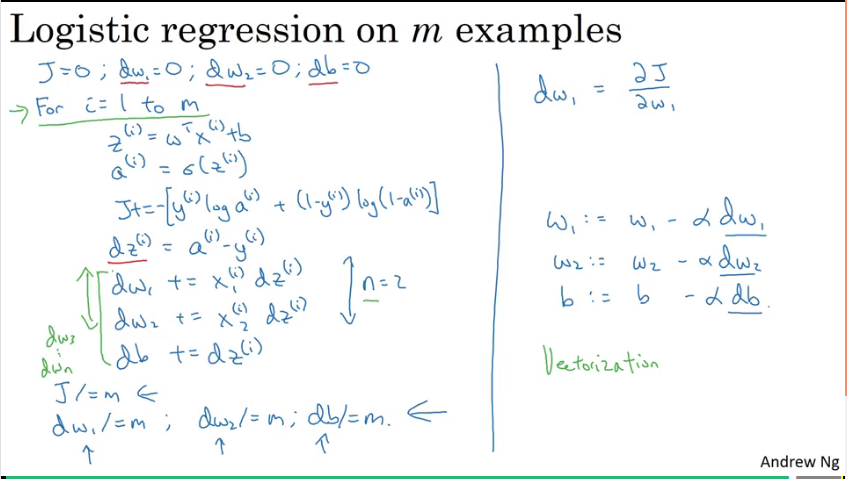 Video #10 starts with “vectorisation is the art of getting rid of for loops in code”. 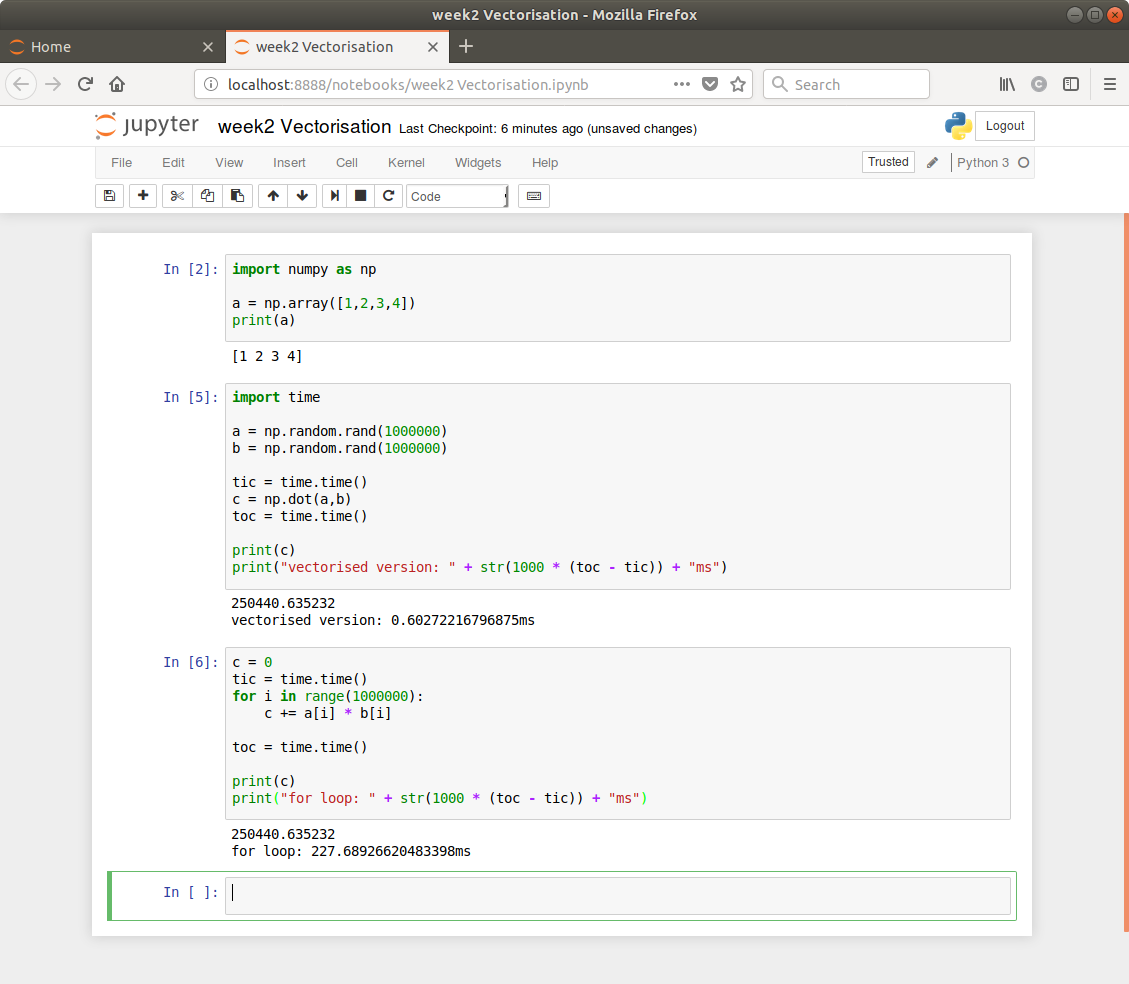 Video #11 elaborates with more Python examples. Numpy will have element-wise functions for each of exp, log, abs, etc so you’ll never need to loop.

And doing the same for A using some implementation of sigma. 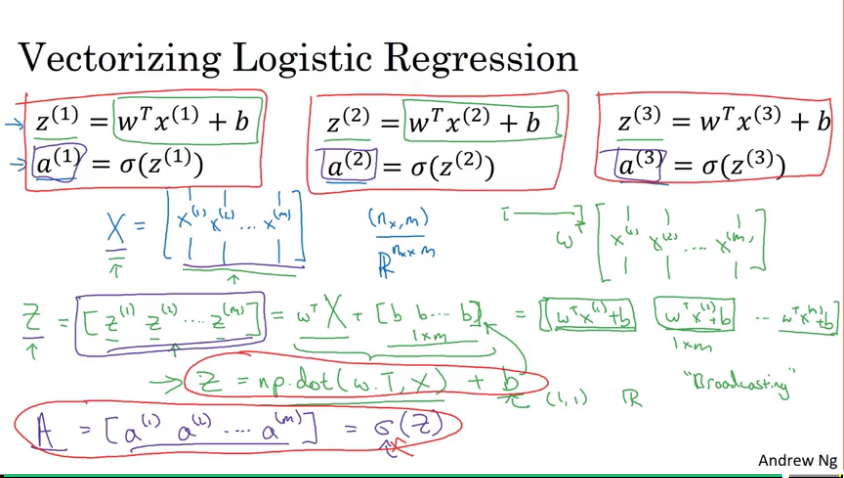 Then he wraps it with a range(1000) outer loop, and I guess it will become more apparent later that these extra iterations gets your weights to a value where they “settle” (and you can probably break out of the loop if the delta becomes neglible).

Video #14 basically means when using Python/numpy, when working with arrays and matrices, the code will intuitively do the right thing. 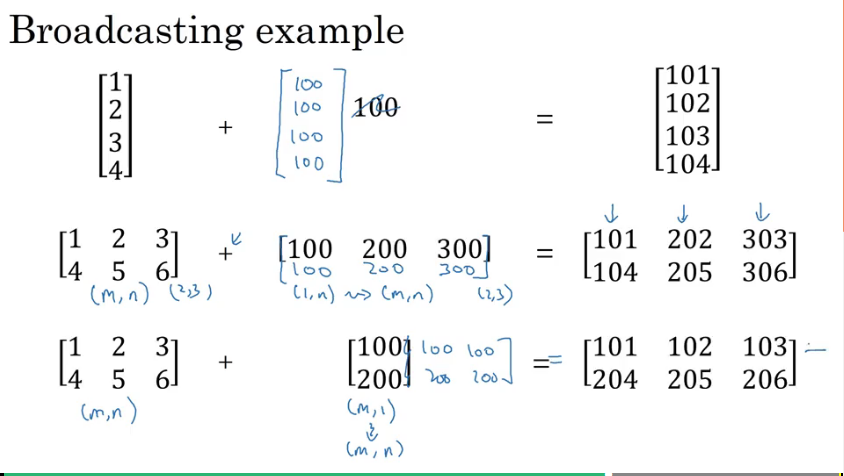 Ng refers to the numpy docs on broadcasting.

A note on python/numpy vectors

Video #15 talks about the pitfalls of working with rank-1 arrays, and urges you to be explicit about your matrix dimensions.

Video #16 introduces us to Jupyter (previously known as iPython notebooks).

Video #17 quickly explains why we like to use the cost function that we do for the logistic regression. Ng recaps the formulas for binary classification, and gets to using “maximum likelihood estimation” from statistics to derive our cost function. 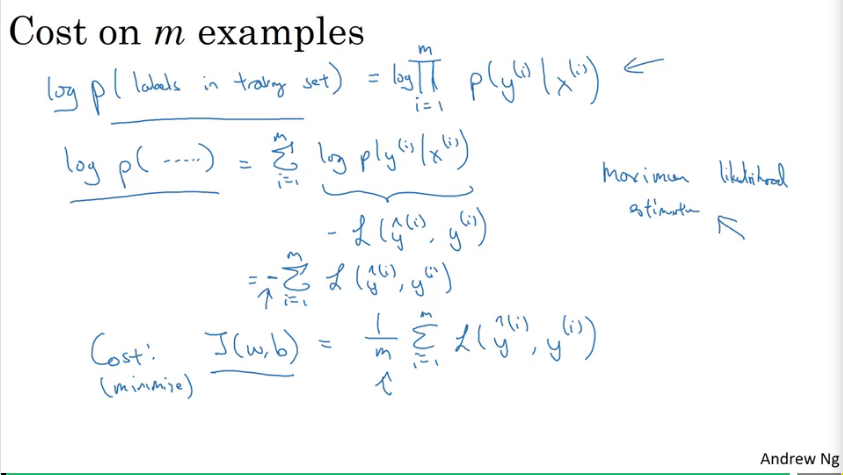 Here follows some code snippets I picked up along the way.

Before building a neural net, you’ll need to pre-process your data. (This is the same gist I picked up when doing my NN diploma back in 2001: cleaning and preparing data is sometimes the hardest part)

Common steps for pre-processing a new dataset are:

The oval “neuron” in this diagram computes a linearity (Wx + b) and then an activation (sigmoid, tanh, ReLU) which is the prediction. 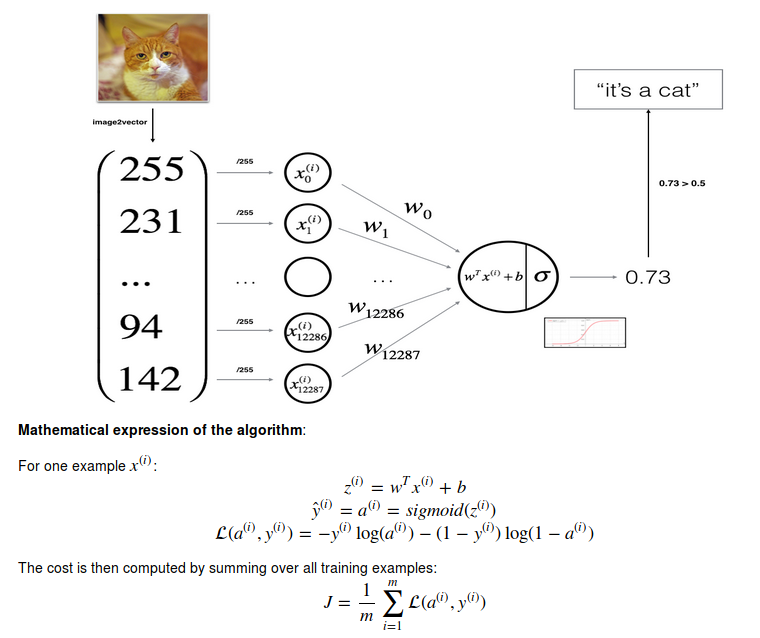 Key steps to building a model

You have a choice of activations

You have a choice of loss functions:

Good activations and loss functions seem to be “stumbled upon” empirically, and must be a topic of research.

An example of good/bad learning rates are illustrated below: good rate converges, and a bad rate diverges. (Images: Adam Harley)

If the learning rate is too large, the cost may oscillate up and down, or diverge completely. Lower cost isn’t necessarily better, and could lead to overfitting. It happens when the training accuracy is a lot higher than the test accuracy.

We have just built a single-node neural network, and from the NN course I did in 2001 I remember this being called a perceptron.

« Week 1 of Neural Networks and Deep Learning The purpose of life isn't to be happy »
Copyright © 2002-2021 Juan Uys, (source code for this website). Updates via RSS or Twitter.