Previously, I concluded (excitedly, mind you) that a Magic-style CCG might be the way to go.

A card could be “nail varnish” of class “smell”. It could carry medium attack points (since it stings the sinuses quite a bit), and since the smell hangs around quite a bit, it could have high “toughness” too. I can also be a “range” weapon, because it affects everyone in close proximity. (The smell starts losing potency when you’re further away.)

I’m a bigger fan of Hearthstone, but the beautifully tactile Magic cards have always made me smile.

I can opine, ideate, research, and analyse until coleoids grow a ninth (or eleventh) tentacle, but now seems like a good time to start making cards!

I’ll build the individual cards by hand, and balance them as I start playing with them. But first, a few notes before starting. I guess I’m ideating again; borrowing from the greats.

Unlike Magic (or like Hearthstone) I won’t have Basic Land cards. I want to avoid whatever “screw” these games suffer from. Each player will get one mana per turn, and max out at N.

Also, we can’t call it mana, because this isn’t a fantasy game. Perhaps money, credit, or ticket stubs?

CC will have heroes. Each hero will have a special ability that will replenish with every turn. A hero will represent a class, or a class might have multiple heroes - not sure.

Cards can be specific to a class, or neutral.

No spell cards, since this is not a fantasy game.

Some cards have “charge” and take effect straight away. Otherwise, cards need 1 turn to “warm up”.

Some cards summon other cards automatically, just like Hearthstone’s Battlecry.

Cards can be “secretive” (like traps) which the opponent won’t know about when played. (e.g. these cards are played face down)

Some cards will have an “adjacency” stat, e.g. Foo can give the 2 neighbouring cards +1/+1. (that’s one extra health and one extra defense) For this reason, it’s good to think of a rule which dictates in which “layout” cards are played, e.g. in a single row, or in any grid formation you like.

Since kindnesses are also something you can exhibit in a public space (like smiling at someone, or offering a handkerchief), kindness cards will exist which will be a neutraliser against the weapon cards.

Resisting the urge to go online and buy new stationary, I just grab a white PostIt stack and I have a pen in my coat pocket.

A few scribbles later, and this: 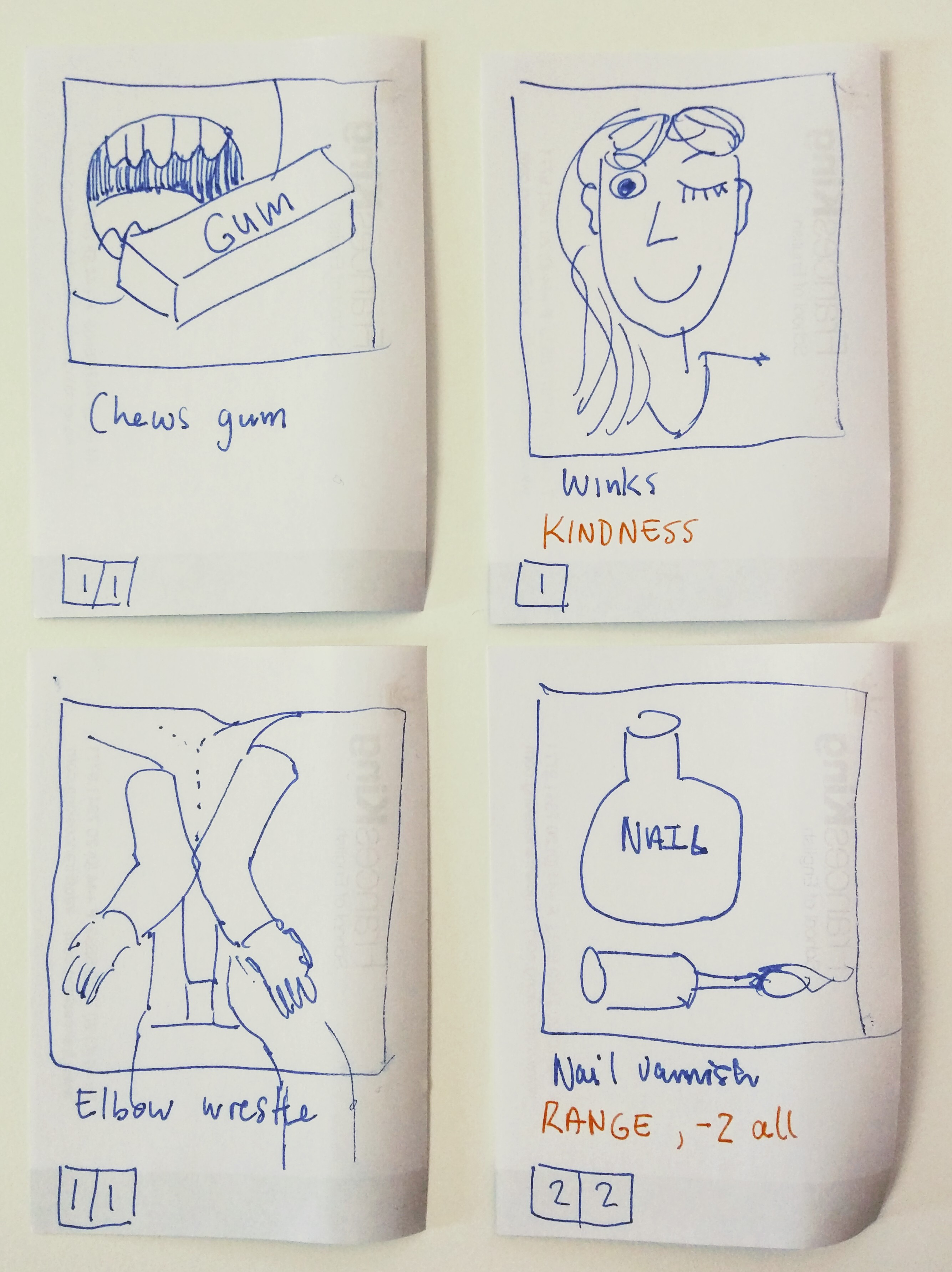 An example play would be (ignoring mana for a moment):

That little play session was actually quite fun, and I am quite eager to get started on more cards.

I’ll now have a think whether an automated solution earlier in the process might speed things up, e.g. a bit of code to turn data and images into beautiful cards.