I’ve now started the 3rd module of the masters, called co-creative development. We’ll go deep on the concept of teamwork. TBH, I’ve always considered myself a bit of a loner, and always thought it would be cool to be one of those devs who made an entire hit game themselves (and the music!).

Rugged individualists -- and there are many, especially at the top -- cannot contribute to real team performance without taking responsibility for their peers and letting their peers assume responsibility for them. Yet they instinctively believe that "if you want a job done right, do it yourself." It is against their nature to rely on others for the really important tasks in life.

Could it make more sense to form a “working group”, rather than a “team”? Perhaps some collective introspection can shed light on this. Katzenbach goes on to define “team” and espouses the virtues of a team being a sum greater than its parts:

A team is a small number of people with complementary skills who are committed to a common purpose, performance goals, and approach for which they hold themselves mutually accountable.

Note that a “working group” doesn’t have these stated properties (2015: 88), which makes it unsuitable for this module.

I’m looking forward to working with a subset of my own cohort and also the the UX cohort. We’ll bring together a mix of technical and functional expertise, problem-solving and decision-making skills, and interpersonal skills.

We’re tasked with taking a personality test, e.g. at Truity. We’ve long known that the Meyers Briggs test is completely meaningless (Stromberg 2014), (Pittenger 1993), so I opted for the Big 5 instead. I only found out afterwards that it is also flawed (Block 1995). 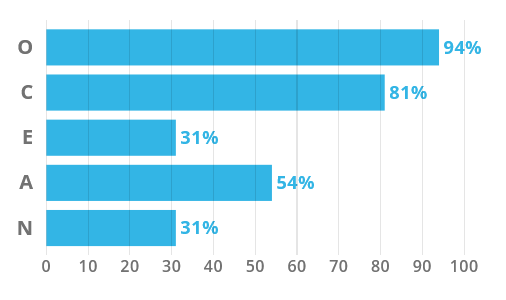 A high Openness (imagination, aesthetics, etc) score comes as no surprise - I’m doing the Indie Game Dev course, after all (which makes the high Conscientiousness score useful, as I’ll be organised and determined to finish it. Or, that’s the aim, at least!). Low Extraversion goes hand-in-hand with my desire for a simple, quiet life, and in fact: I can tinker away quietly for hours in my home office (as much as a life with wife and 2 kids allows; my friends come third, haha!). Average Agreeableness makes sense, as I tend balance my needs with those of others. I was surprised to see some Neuroticism, which is probably due to Covid, Brexit, having ageing parents, etc. I’ll try and pay less attention to the news from now on.

Josh and I threw some ideas around, and kind of circled back to doing something audio-related a couple of times (I spend way too much time staring at screens!). Josh was keen on starting with accessibility first this time around, and is something he has reflected on before.

I’ve realised this week how organisational I really am. I created the team space on Microsoft Teams, then set up the first tech task list, and organised the first meeting with Doodle.

This post is part of my critical reflective journal and was written during week 1 of the module co-creative development.