A tale of two beverages

Names of individuals were changed to protect the innocent, but the beverages remain true.

About ten years ago, the UK government decided to fix its publishing, and the Government Digital Service was born. It was the hot new job in town, and my agent got me an interview.

I rock up at Aviation House, and G4S give me a fob, and some tidy young civil servant takes me up and through corridors plastered with Post-Its to meet my interviewer, Pete.

Introductions. Tour. “And this is the kitchen. Would you like some tea, BTW?” While I say uhm and think of a way to say no thanks I don’t really drink tea, Pete grabs a stained limestoned mug, plonks in a baglet of Yorkshire, and holds the mug under the hot water dispenser. He then splashes in about a gallon of 1% milk, and hands me the mug. “OK, let’s meet Mike and start the interview” and we set of to a side room.

A put the cold mug down on the table. The 1% cloud is sitting there with the corner of the teabag poking out. Mike arrives. Hello. Shall we start? Describe everything that happens the moment someone clicks on a URL.

I know this question. It’s open ended. It’s for them to gauge how much you know about the web in general, but also what interests you most about web technology. Not that I’m that interested in routers and switches, but I talk about routers and switches too. No-one folds their arms, so I’m doing OK. But Pete is looking at the mug next to me on the table.

A few more questions. Tell us about yourself. Blah blah, and I tell them about an up-coming interview I have with Yammer in San Francisco. They’re very impressed by this. I think their eyes light up a bit more, because I’m suddenly validated by <insert cool Silicon Valley corp here>, not that SF is in the valley, but hey.

“Let’s introduce you to the team” says Pete. “Don’t forget your tea.” I look down at the mug. The 1% cloud is still sitting there, having now slightly entropied with the cold water around it. The teabag is holding onto its aromas and flavours for dear life, as nothing is seeping out. “I’m too ruddy cold!” the teabag shouts at me. A take the mug, and follow Pete and Mike out.

I get shown kanban boards, and hot desks. Excited young developers are pointing to user research and talking about graceful degradation. Pete’s eyes flicker from my face to the mug. I bring it up to my lips, but don’t take any of the cold swill into my mouth. Then I swallow nothing. Mmmhh yum, my face says. Nice tea.

More people, more yellow squares stuck to walls, more founts of knowledge about UX, automated build pipelines, and KPI dashboards. Interview over. “Be right back”, I say to Pete, over my shoulder with my body obscuring the mug in my hand. I seek out the kitchenette. Basin. Pour.

“What’s wrong with the tea?” Pete says from the doorway. Some terrible excuse comes forth. I don’t remember what I said, so I’ll make something up again: “uhm, I have to go, no time to finish it. Lovely few sips, though!” Pete looks disappointed.

I land at SFO, take the BART to downtown SF, find my hotel, drop my bag, then head out to find food. My day just got much longer, but it’s too early for bed. I find some supersized sushi somewhere. I would later learn that all food are bigger in America.

My alarm wakes me the next morning after a night of tossing and turning. A bit earlier, so I can squeeze in a walk, and see some sights before the big meeting. They’re paying for flight, hotel, and expenses, but bookended my trip to fit in just the interview. I eventually end up in the Mission District, feeling the heavy tendrils of jet lag tug at my brain flaps.

I find the office, but have 20 minutes to spare. A strapping young chap walks up the sidewalk, and I ask him where I can find some good coffee.

“Yo, my man. You have to try Phil’s Beans, yo! With a zed!” He points to a street corner, “Go down there, you can’t miss it.” I think I stumble upon a Philz Beanz, but can’t now remember if it had that many zeds. I walk in. 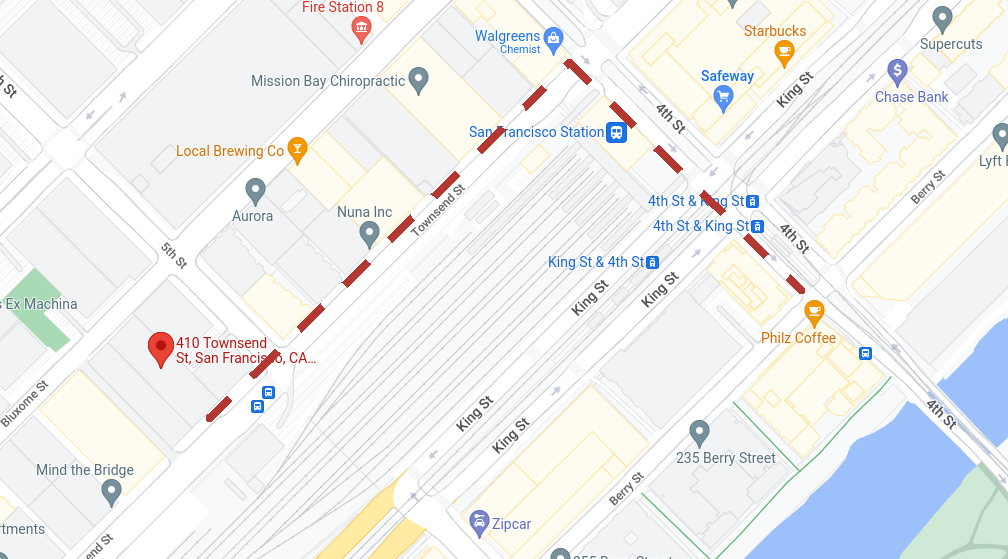 I ask for a normal black coffee. I get asked all sorts of questions about drip style, beans, whether I want it filtered through moon rock, and if I want my chakra rebalanced while I wait. (Half of that is true.) I eventually get handed a bucket of coffee (or, what would pass for a normal serving size over there, I guess, or perhaps I should finally learn what VENTI means so I can say no next time).

Sip, walk, cross the road, sip, sip, buzz, sip, “Come up, we’re on the second floor. Above TechCrunch.”, sip, up the stairs, sip, BUZZ. (That last buzz isn’t me pressing the buzzer, it’s me buzzing.) I get buzzed in, and enter an office where everyone is standing at their desks, with a dog at their feet.

At this point I’m thinking “oh, no”, not because I don’t like standing desks or dogs (I love dogs), but because it feels like something class A is coursing through my system (going by anecdotal descriptions of said class, of course).

From here on out the day can be divided into two parts:

Seven hours later, I’m utterly exhausted. I’m starving. I had a greasy breakfast, because for my tummy it wasn’t breakfast time yet after I woke up. It was dinner time. So, not the usual slow burn of oats, which means I had dinner for breakfast. And then my body wanted to go to bed for 8 hours, but that 20 ounce cup of Philz said no.

Remember what got you this interview, I say to myself. You made that kick-ass extension to jerkson that everyone wanted, using Scala’s case class default parameters as default values for missing values in JSON payloads. (Yes, that made sense to me.) So, you’re not bad. They flew you here to talk to you.

My heavy feet walk me back to the hotel to pick up my bag. Back to SFO. Night flight. And, of course, again I don’t sleep.

So, here we are, ten years later, fondly remembering how two beverages completely scuppered two prestigious jobs for me.

Alas, memory is an unreliable foe. What really happened was that GDS had trouble sponsoring my visa (yes, a government thing couldn’t organise a government thing), and Yammer got bought by Microsoft shortly after, which changed their plans for opening a London office a bit.

But, I blame it on those two beverages.

PS I would later get British citizenship and work on the second phase of GDS (transforming services) as a contractor, working alongside Pete and Mike. They’re nice guys, but they never offered to make me tea again.