I started hacking on my mini-LD 69 entry about two weeks ago (alt link).

(If the game doesn’t seem to load (no 3D objects), or dev tools shows a JS error, just refresh the page - apparently my RequireJS fu leaves something to be desired.)

Why? I love games and wanted to do something other than the Finance Gubbins I’m currently building. (hush hush - I’ll link to it later once I get permission)

I spent a couple of hours a day for the past two weeks on it. Being a dad/husband (and on a full-time contract) prevented me from blasting this out in 48/72 hours to feel what a proper LD would be like.

The hostile alien throwing the middle tentacle is my own doing. I drew it in 2013, after seeing Matthias Adolfsson’s work. (I’m a big fan — I even went as far as purchasing a Namiki Falcon, because that’s what he uses.)

An opportunity to learn

I wanted an opportunity to learn three.js. (It’s bloody marvellous!) The aim was to boost my D3.js skill-set with something similar-yet-different, and hopefully, now I’m a step closer.

I forgot I also wanted to use Elm, so perhaps I’ll brace mini-LD 70 with my pattern matching skills.

Also, I should have spent a bit more time studying Euler angles, Matrix ops, &c up-front instead of tweaking/reloading as often as I did.

First of all, let me honestly claim this wasn’t inspired by Tetris. I just thought “how could I convey colonisation of a territory in a quick way” and cubes and stencils were the answer.

I try to procedurally generate as many things as possible from an initial configuration.

The game splash page is a bit all over the place right now, but it’s playful and simple enough for my liking.

Talking about stencils, aka “colonies” — the constraint here is that stencils come in pairs. For example, if you see a stencil with half the pixels missing, you can rely on its analogue to appear randomly later in turn.

I think this is information the player can rely on. It was suggested on the LD forums that I make more than two stencils for a face, but I’m sticking to this constraint. Taking Tetris as an example, you can always rely on the Tetriminos looking a certain way.

There are 8 types of stencil: all, half, quarter, diagonal, checkered, centre pixel, one pixel in the corner-ish, and random.

Random is the challenge. Everything else is easy but gets trickier when the speed cranks up. High speed + random is the killer, and perhaps the difficulty can be tweaked for this combo. But, I guess the player has to be ejected at some point!

It seems a bit weird that the colonies attack from a fixes vantage point and orientation, and that the planet has to rotate to accomodate them. Well… remember Futurama’s Professor Farnsworth’s Planet Express space ship?

The ship does not actually move itself, but, using the Dark Matter Accelerator, it moves the universe around it…

That’s how the colonies view the planets ;-)

Tests! But this is a throwaway thingy, so the Test Police can go fiddle one.

Audio! I’m sure I’ll add a few procedurally-generated SFX if I decide to tweak it all a bit more, but otherwise, the time constraints kicked in.

Playtesting! I could scale the difficulty a bit better. Perhaps calibrating the “random” colonies to make it a bit easier. Otherwise, the difficulty scales up linearly. 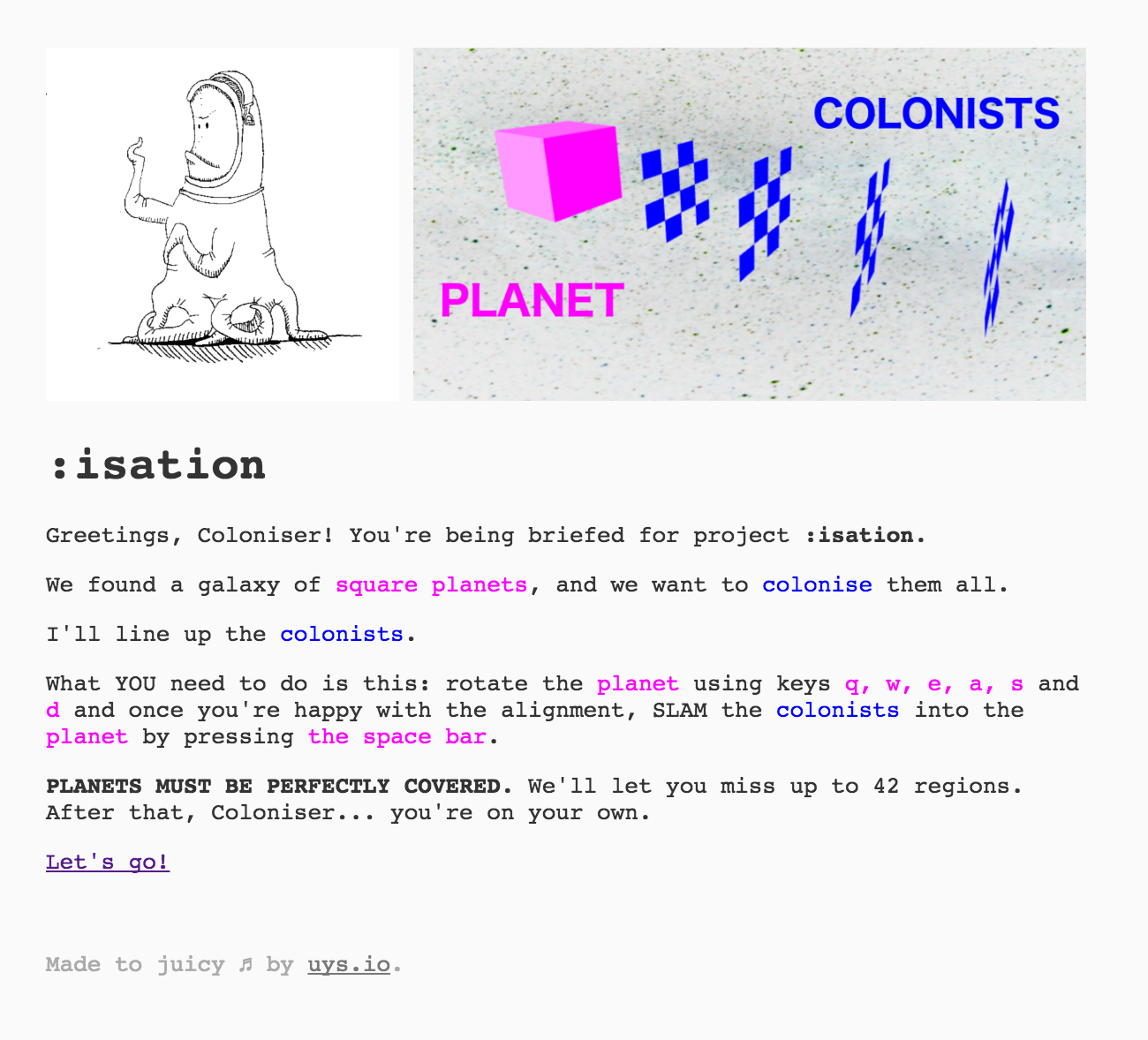 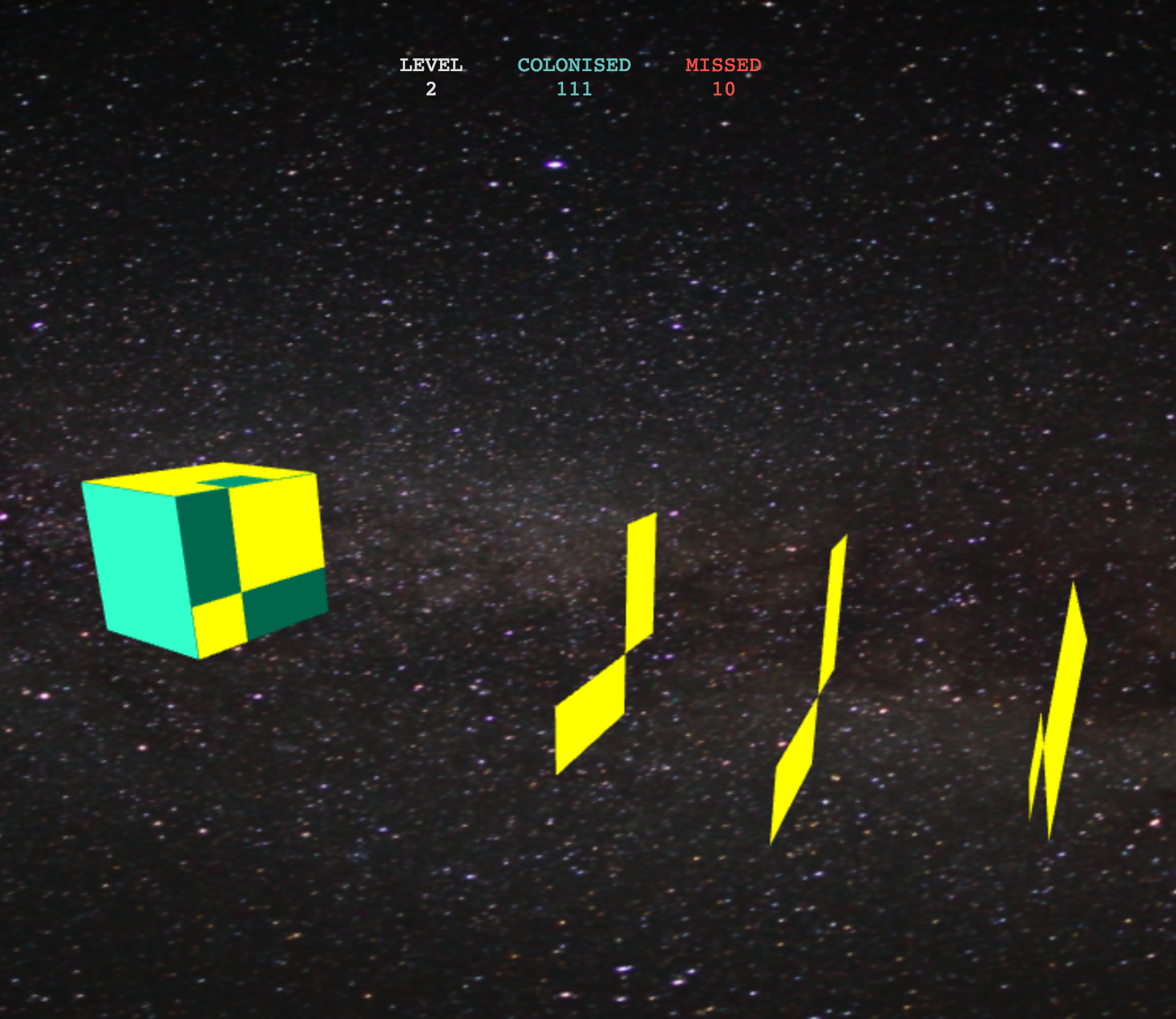