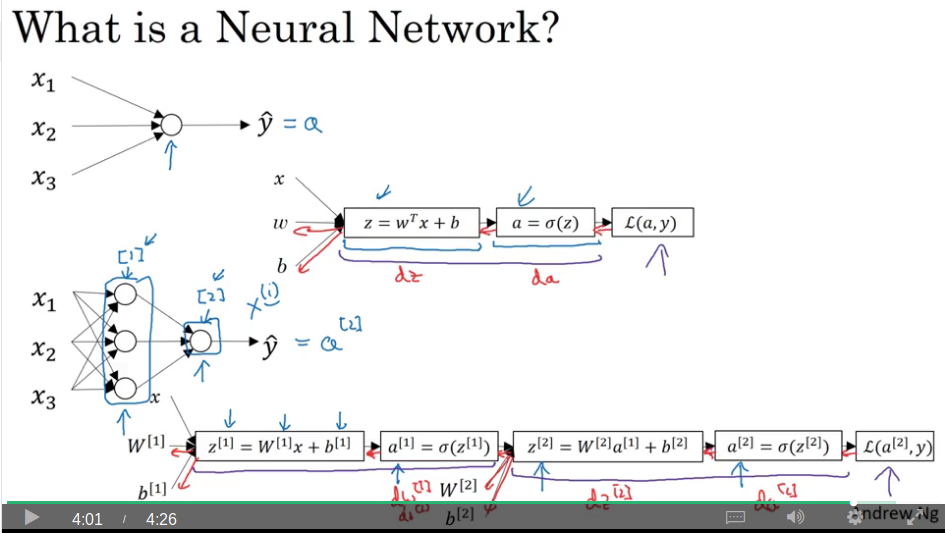 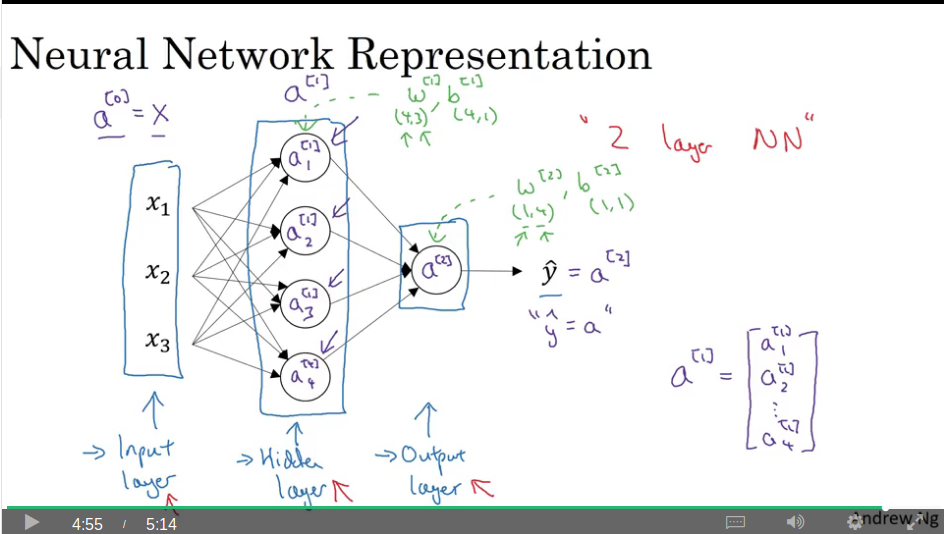 Video #3 says that our new representation of a neural net’s hidden layer contains more than one of the single-node logistic regression node we studied in week 2. 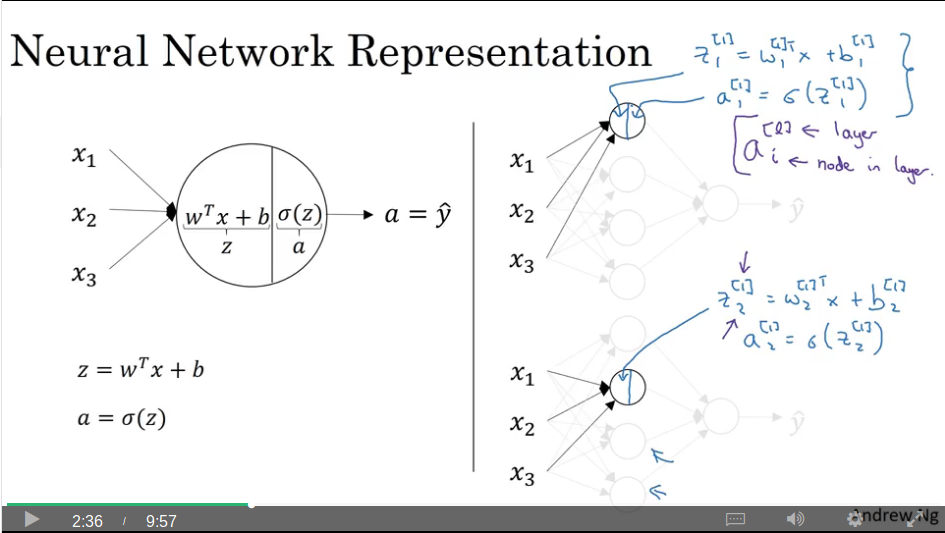 Again, the trick is to not for-loop over the 1+ new nodes, but to vectorise a solution.

To compute this 2-layer network, you need these 4 formulas: 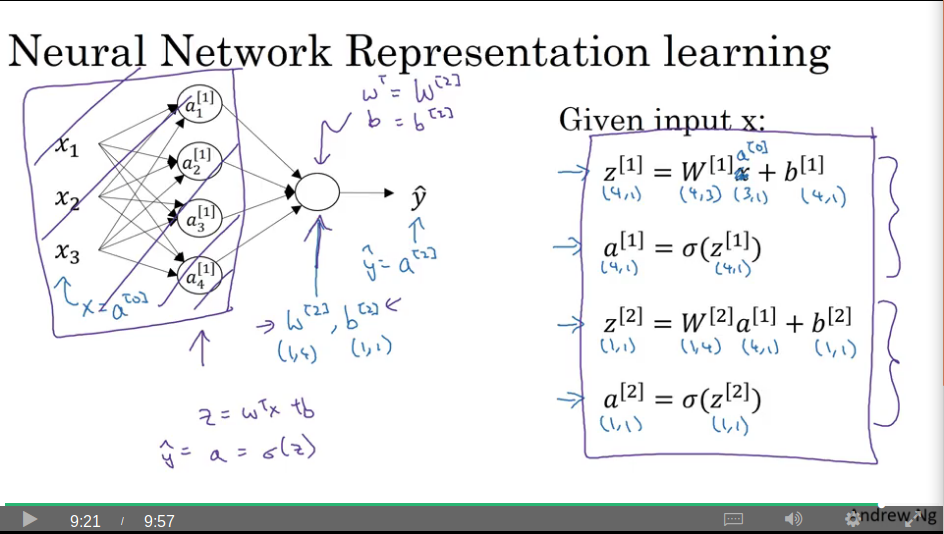 Video #4 is like before, but vectorising across many training examples. 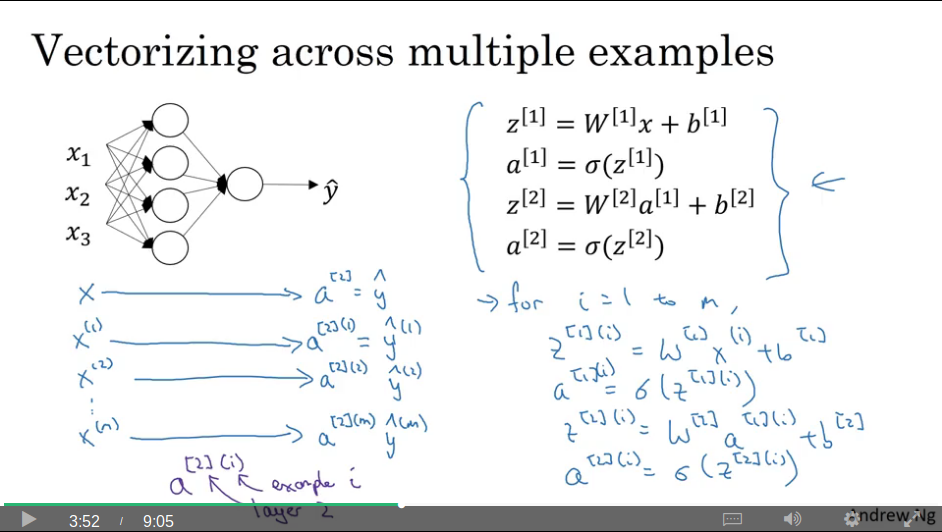 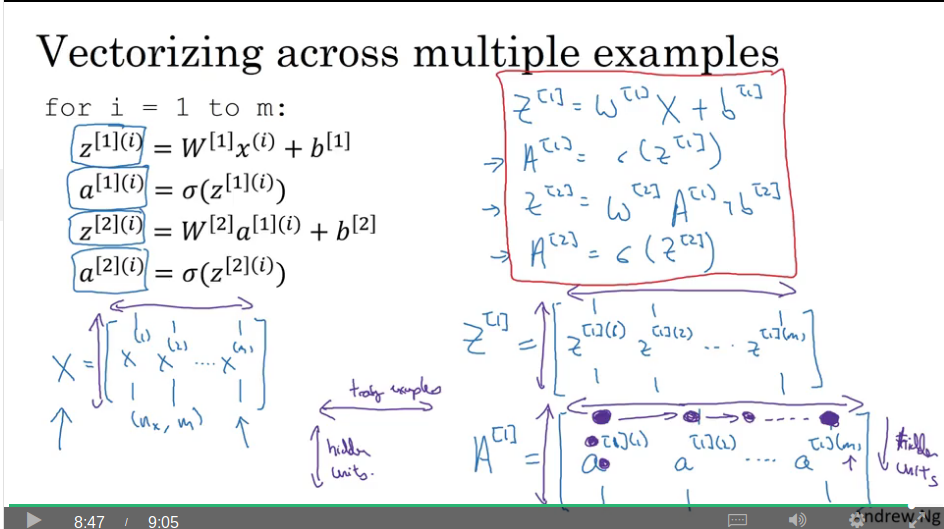 Video #5 just adds an explanation to the previous concept.

Video #6 notes that thus far in the course we’ve been using sigmoid activation function, but reveals alternatives. The first candidate being tanh or the hyperbolic tangent, which Ng notes is almost always a better choice than sigmoid (because tanh yields a 0 mean, and sigmoid a 0.5 mean, so tanh centers your data, but doesn’t elaborate further)

The exception is to use the sigmoid function on an output layer which does binary classification, where you’d like a prediction between 0 and 1.

The downside to tanh (which is the same for sigmoid) is that the slope is zero when z is very large or very small and this can slow down gradient descent.

Which brings us to ReLU. The derivative is 0 when z is negative, and for positive z the slope is just very distinct from 0, so your network learns much faster, and this works well in practice. 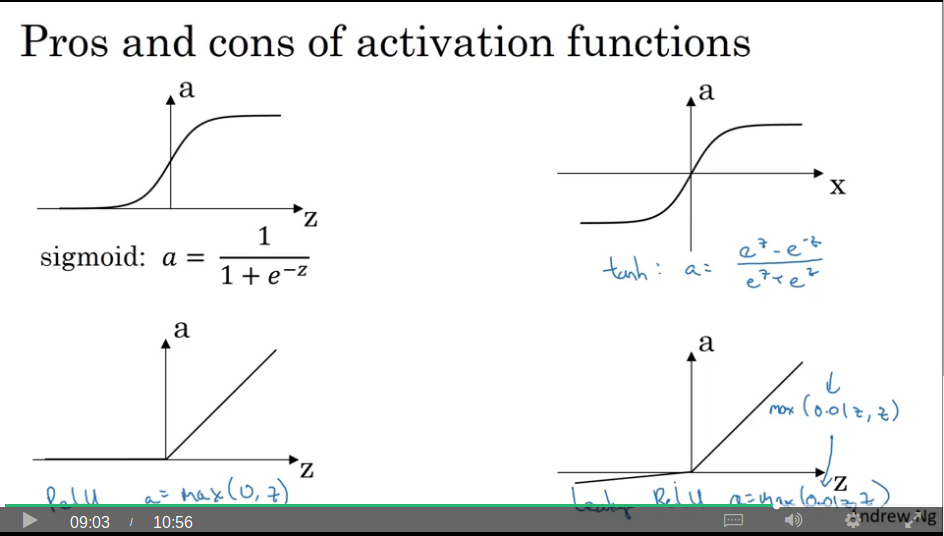 Ng ends with a note that we’re spoilt for choice when it comes to which hyperparameters, activations, loss, etc to use, and you have to “try them all” to see which suits your application the best. Time to get a second GPU, then.

Why do you need non-linear activation functions?

Video #7 asks “why need an activation function at all?”

However, if your output is a real number (not a classification), e.g. like predicting a house price, then you don’t want a linear activation function.

Video #8 reminds us that back-prop uses the slope of the activation functions. 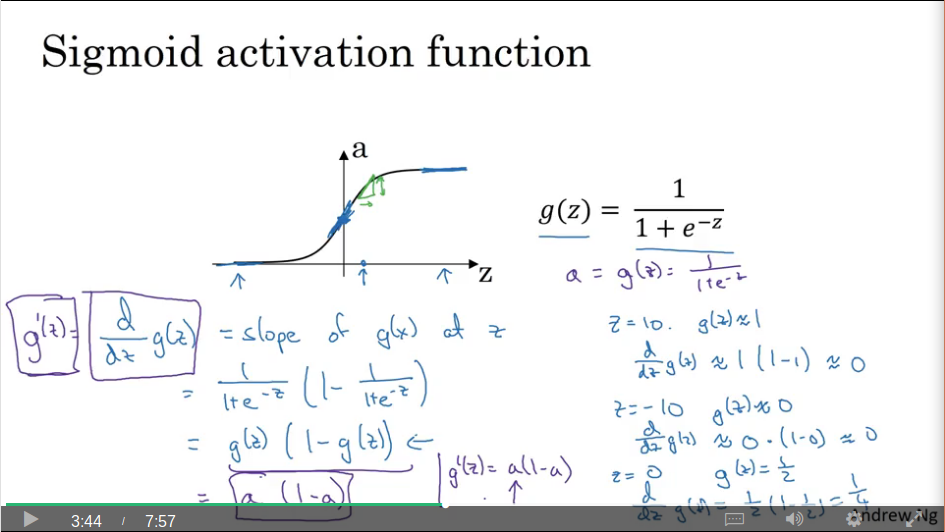 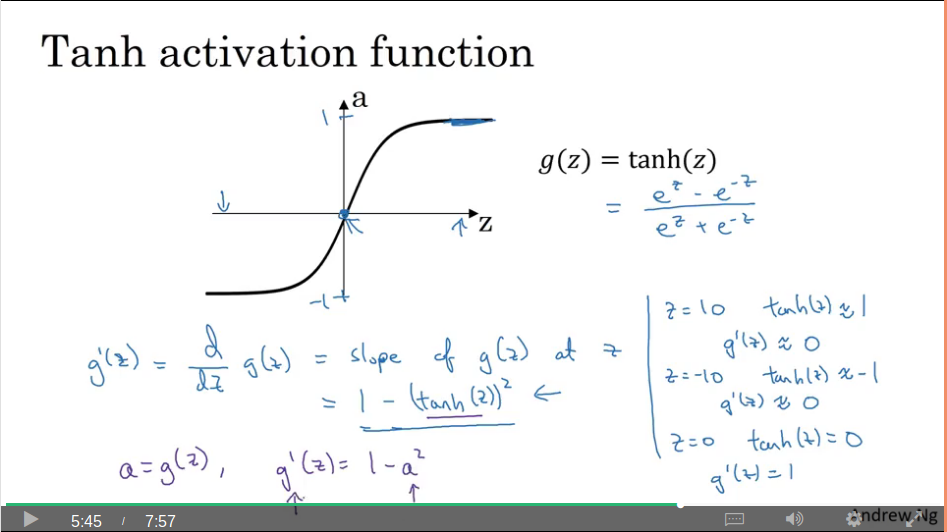 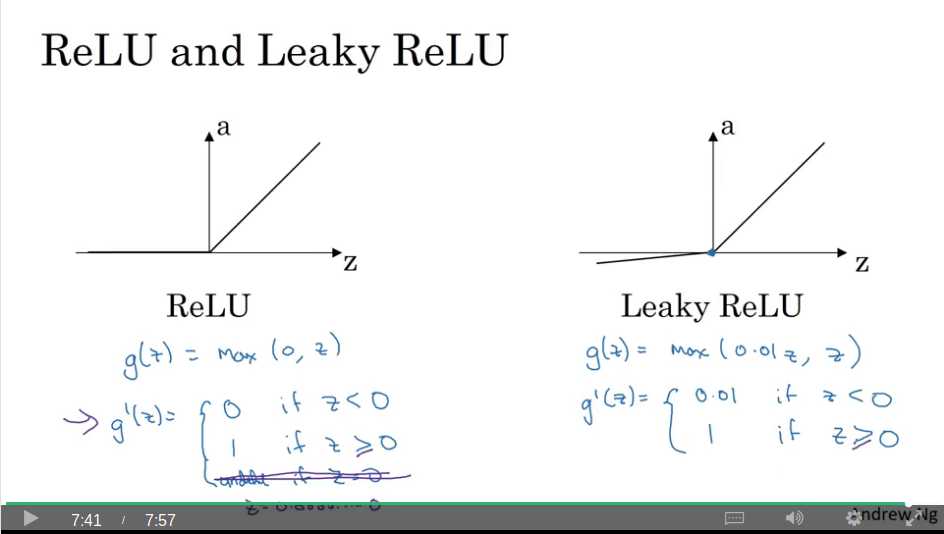 Video #9 is the crib sheet for the formulas for a one hidden layer neural network.

A note on matrix dimensions: For a network with the first layer size nx = n0, the hidden layer size n1, and the output size n2 (or 1), the dimensions will be as follows: 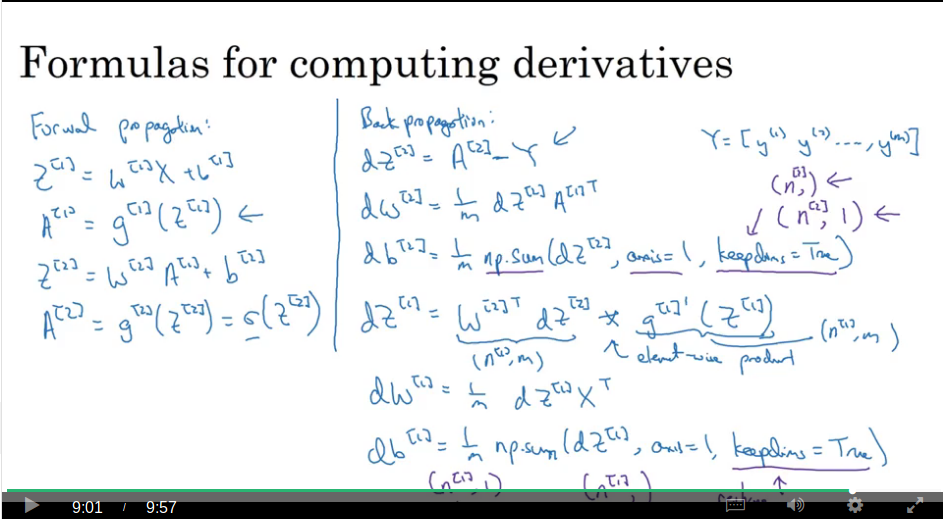 Video #10 explains the cribsheet from the previous video. Worth a watch. 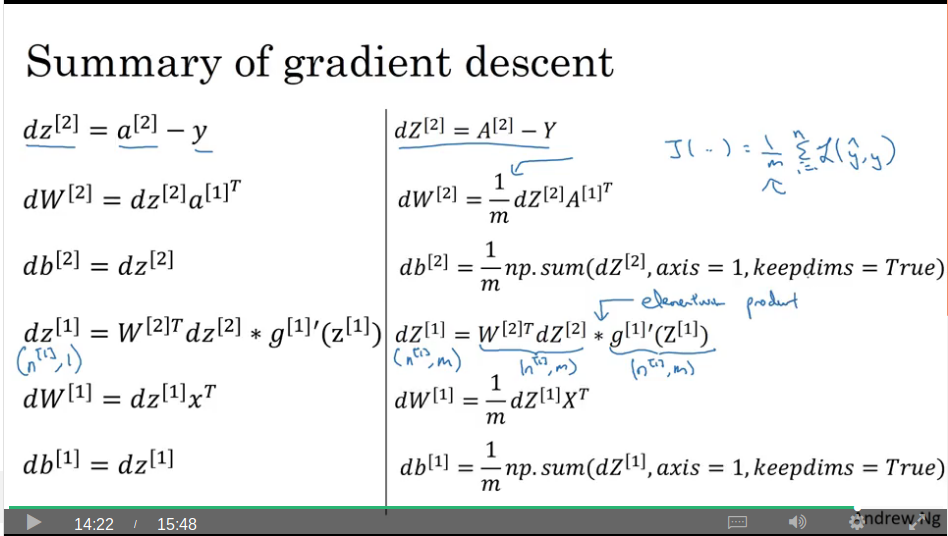 And with that Ng notes that we’ve just seen the most difficult part of neural networks: deriving these functions.

Video #11 starts of with stating that initialising weights to zero for logistic regression was OK (because it’s single node), but for a neural network it won’t work: you end up with a symmetry problem - all nodes compute the same thing. The bias can be initialised to zero.

0.01 is OK for a shallow network, but next week will discuss why you might want to use smaller values (epsilon?).

The model we built by hand in the previous week’s’ exam can be summarised in these few lines using sklearn:

Neural networks are able to learn even highly non-linear decision boundaries, unlike logistic regression. The techniques learnt during this week can still lead to overfitted models (when using many iterations), but in later weeks we will learn about regularisation, which lets you use very large models (such as n_h = 50) without much overfitting.

« The purpose of life isn't to be happy Week 4 of Neural Networks and Deep Learning »
Copyright © 2002-2021 Juan Uys, (source code for this website). Updates via RSS or Twitter.