Video #1 says that a deep neural network has 1+ hidden layers. The more layers, the deeper. Deep nets can solve problems that shallow nets just can’t. It recaps some notation from the previous week.

Video #2 shows what forward prop looks like in a deep net. Ng notes that a foor-loop would be necessary when applying Z = WA + b for each layer, so vectorisation can’t be applied here. 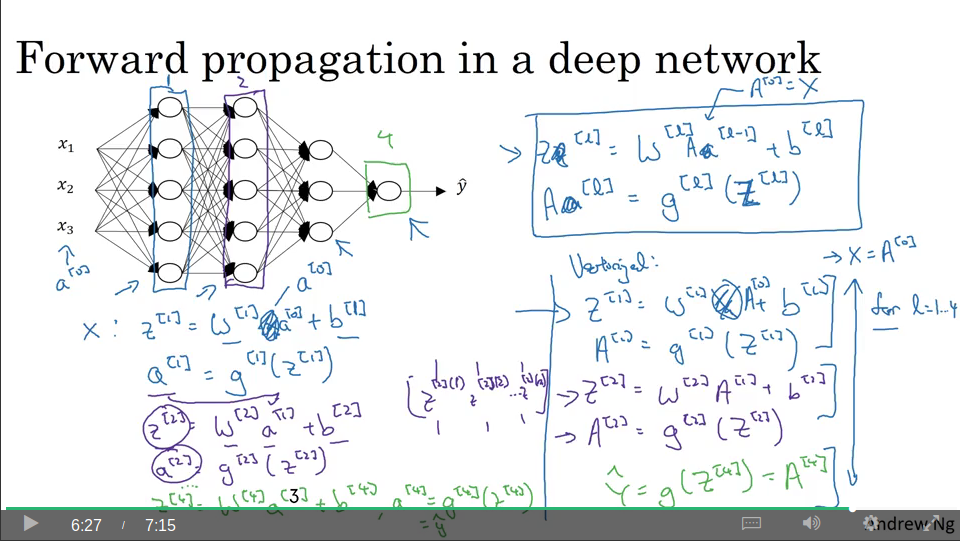 Getting your matrix dimensions right

Video #3 says a nice way to ensure your model is bug-free is asserting the matrix dimensions are correct through-out.

For a hidden layer of weights, the dimension would be Wl = (nl , nl-1) A hidden layer bias vector would be bl = (nl, 1) The derivatives of w and b would have the same dimensions. 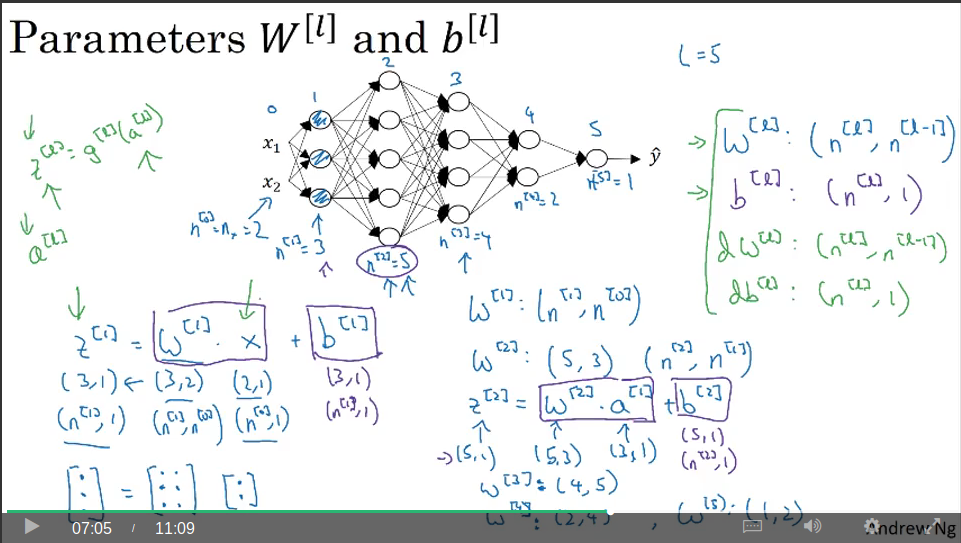 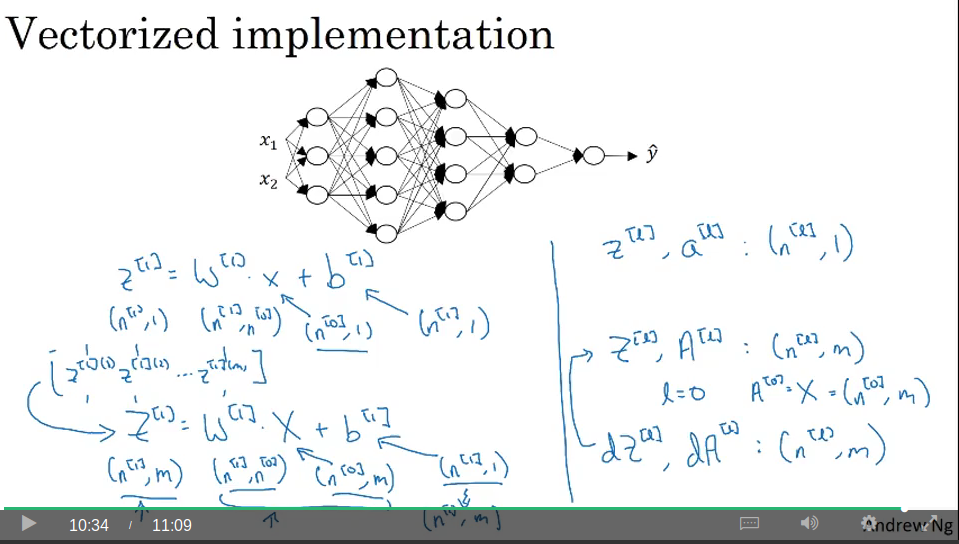 Video #4 provides some intuition as to why deep nets are better than shallow nets for some problems.

Going from left to right through the hidden layers, the left layer would detect small features like vertical or horizontal lines. The next layer might combine these lines and use them as building blocks for detecting larger features, like an eye or a nose. The next layer goes further by combining eyes and noses into faces.

(as an aside, this is where Capsule Networks make networks better in the sense that an eye a nose in a certain configuration can vote about what the surrounding face is, whereas currently a neural net would still classify a face as a face if you swap a face’s nose and mouth, for instance.) 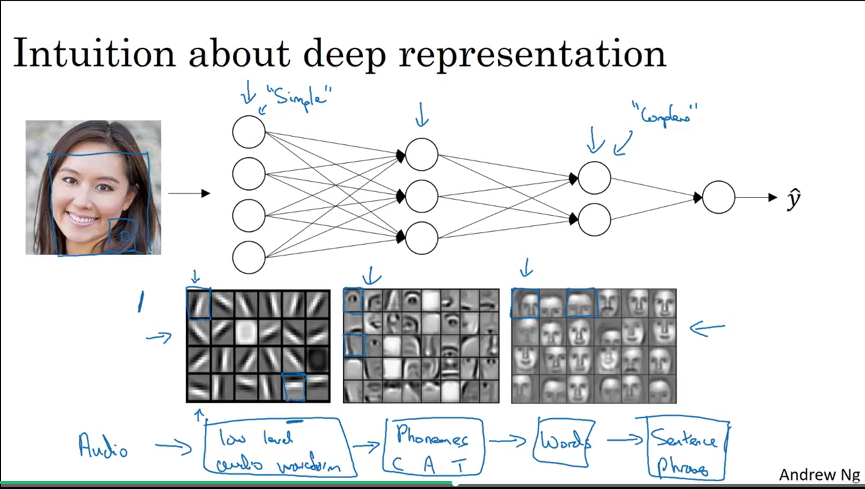 Ng also mentions a result from circuit theory, but he doesn’t find the result very useful for intuiting about the usefulness of deep VS shallow nets, so I won’t note it here.

Video #5 shows the building blocks, which is basically the single layer stuff from the previous week, but extrapolated out over l1, l2, …, ln. 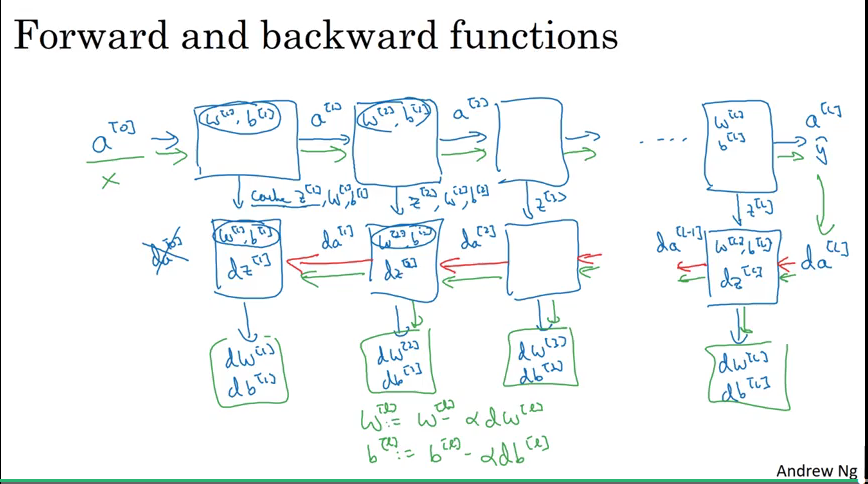 Video #6 discusses implementing the steps from the previous videos.

Again, it’s the formulas from the previous week, but extrapolated over layers l1, l2, …, ln. (the un-avoidable for-loop) 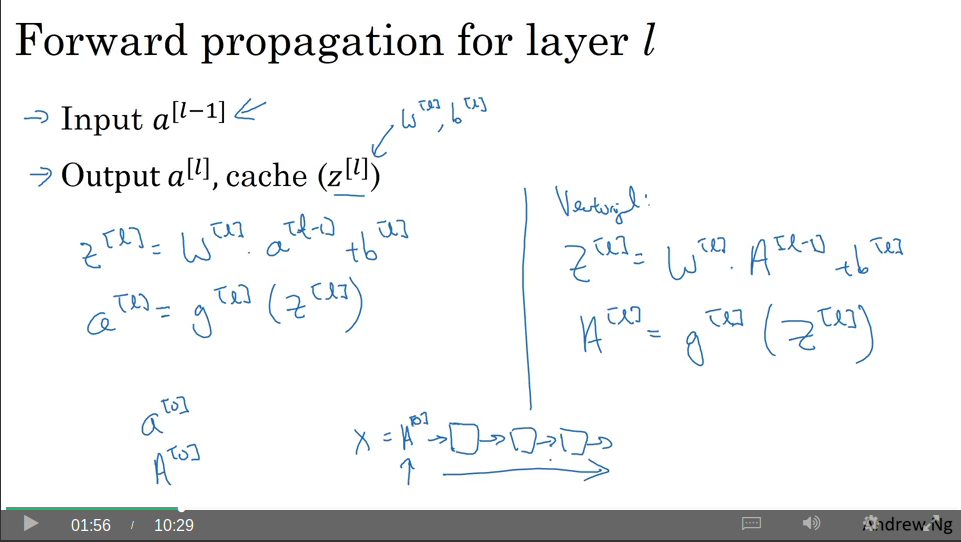 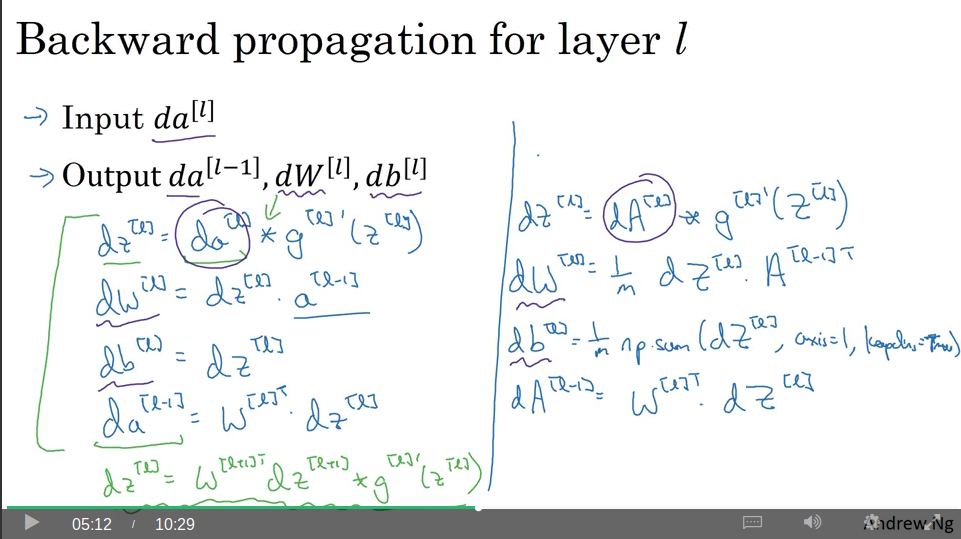 As X is the input for forward, what is the input for backward? This would be the derivative of the loss, L(yhat, y), which can be shown to be dal = -y/a + (1-y)/(1-a) but for the vectorised version dAl. 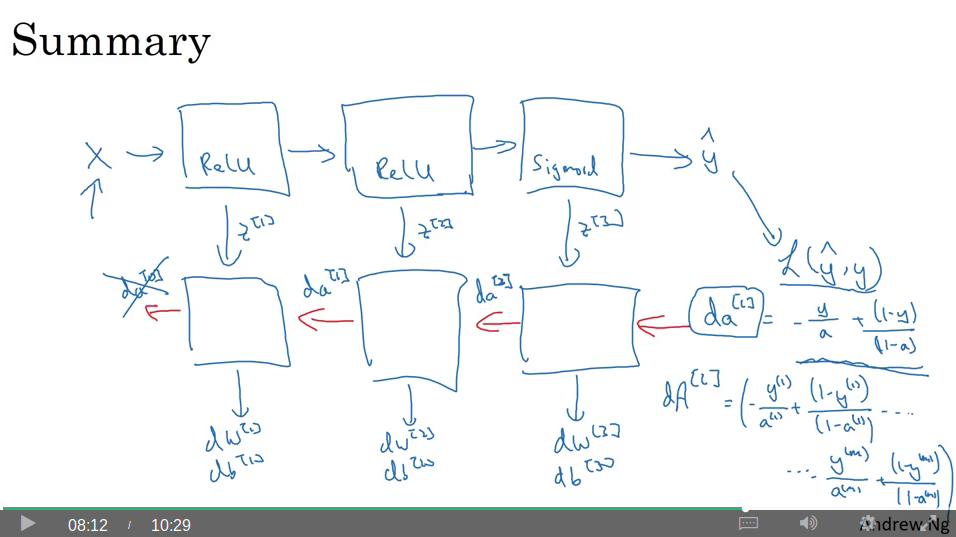 It’s difficult to know the best configuration in advance, so iterate a lot. You can build a sense of hyperparameters across applications.

What does this have to do with the brain?

Video #8 says the answer is “not a whole lot”. Shows an analogy between a single logistical unit and a biological neuron.

Things to look forward to

In the next course

During the exams, when training models some models had worse results when too many iterations were used. Lower iterations gives better accuracy on the test set. This is called “early stopping”. Early stopping is a way to prevent overfitting.

And… we’ll be learning Tensorflow. Being a dual-Clojure/Python dev, I’ve actually spent most of my time with Cortex, so I’m excited to expand my toolbox.

And that wraps up the first course.

« Week 3 of Neural Networks and Deep Learning My deep reinforcement learning hardware, one year on »
Copyright © 2002-2021 Juan Uys, (source code for this website). Updates via RSS or Twitter.