Video #1 talks about the motivation: you’ve worked on your cat classifier model, and only achieve 90% accuracy.

You have ideas how to improve:

This course will teach you strategies to point you in the direction of the more promising things to try.

In Video #2 talks about orthogonalisation, which is knowing which change effects which outcome.

Now imagine you had only one knob, which - when fiddled adjusts the picture in this way:

This knob would be impossible to use.

So, Orthogonalisation means that the monitor designers designed the knobs and underlying circuitry so that each knob does only one thing.

The chain of outcomes we’d like to perform well, in order, are:

Each of these steps would have different “knobs” you can try, e.g.

Setting up your goal

Video #3 shows a single number which you can look at to help you choose a classifier to iterate on.

Instead of looking at both Precision and Recall. (Ng mentions don’t worry too much about the definitions for now, hence my own link)

The one number to look at is the F1 score. The hand-wavy way to think of it is the “average of Precision and Recall” says Ng. More accurately, it’s the Harmonic Mean of P and R: 2 / (1/P + 1/R). F1 becomes your single real number evaluation metric.

Your app targets four regions, and your classifier gives different error rates for each region. A single real number metric hear could just be the average of those four numbers and then the classifier with the lowest average error is the better one.

A dev set and a single real number evaluation metric will help you make better choices with your classifiers.

Video #4 shows that you needn’t build a hacky cost function to help you make a decision, e.g. accuracy - 0.5 * running_time, but instead of say something like “I’m happy with any running time below 100ms, after which I’ll choose the most accurate”.

In this case, “running time” is satisficing, and “accuracy” is optimising.

You’ll have one optimising metric, and one or more satisficing metrics. 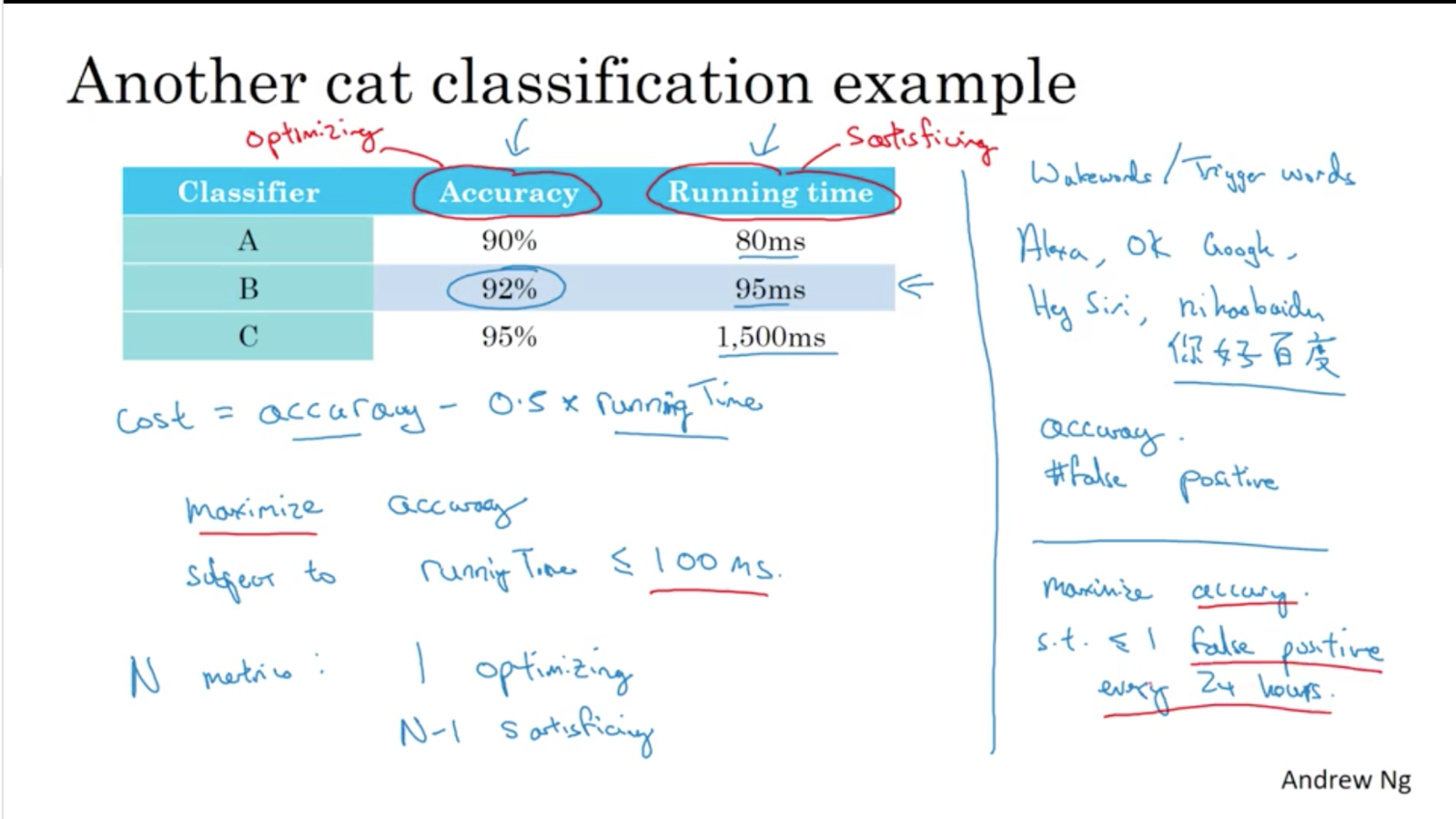 Dev set is aka the “hold-out cross validation set”.

Choose a dev set and test set from the same distribution to reflect the data you expect to see in the future AND consider important to do well on.

E.g. if you’re targetting US and China with your app, don’t make the dev set US, and the test set China, because you’ll end up with moving targets.

Size of dev and test sets

Video #6 shows how old-school heuristics like a 70%/30% split on train/test doesn’t really make sense if you have big data.

Set your test set to be big enough to give high confidence in the overall performance of your system.

The set you’re tuning/iterating on is the dev set, although this was previously called test set. Which brings us to: sometimes you mighn’t need a test set, just a train/dev set, because a large enough dev set means you might not overfit it too badly. Ng says he still prefers a test set in all cases.

When to change dev/test sets and metrics

So far we’ve discussed how to define a metric to evaluate classifiers, but now we’ll talk about how to do well on this metric. Aka we’ve determined where to place the target, but now we’ll focus on how to hit the bull’s eye a bit better. That might be optmising the cost function J that your network is optimising.

It talks about Bayes optimal error, the best possible error. E.g. the perfect error might not be zero if an image is just too blurry to classify.

Human tasks are still valuable if the ML is poor, e.g.

Knowing how well humans do can help you reduce bias and variance.

Bias reduction techniques could be training a larger network or running the training set for longer.

Variance reduction techniques could be regularisation or increasing the training set.

Human error is a good proxy for Bayes error in image classification, because eyesight our stronger sense.

The difference between human/Bayes error and the training error is called the avoidable bias: keep improving your training performance until you reach Bayes error. (you can’t go further, because Bayes error is the theoretical limit)

The difference between training error and dev error is the variance. 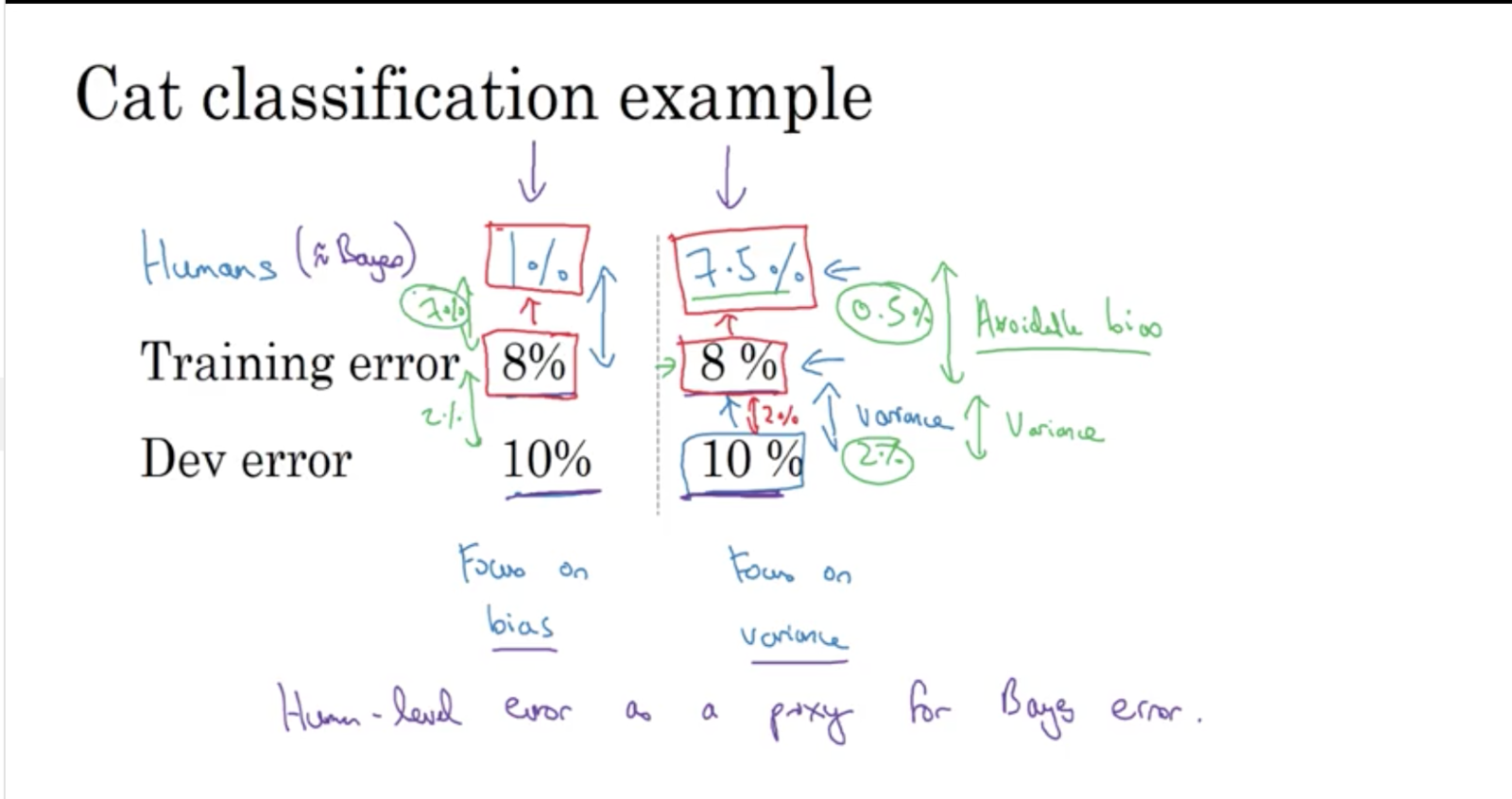 Depending on the context, the answer could be to go with the Bayes proxy, i.e. with the lowest error if you want to diagnose correctly. Or the context could be to have a low-level “see a specialist” recommender which could fare as well as a typical doctor. 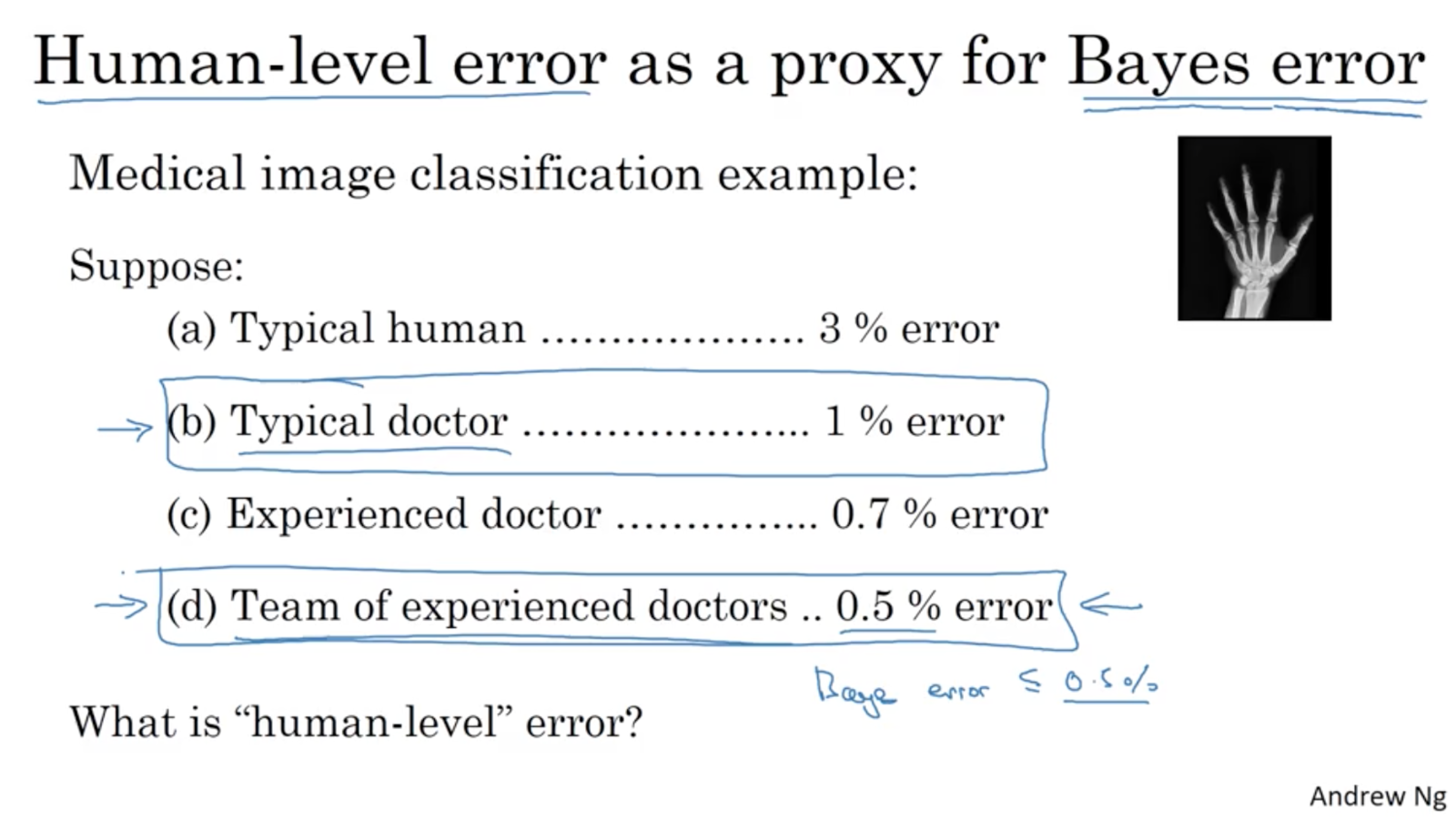 Ng applies this “choice” of humans to the bias/variance decision, e.g. whichever human level you choose, if the training error is far off, focus on avoidable bias.

This session pulls it together into a set of guidelines: 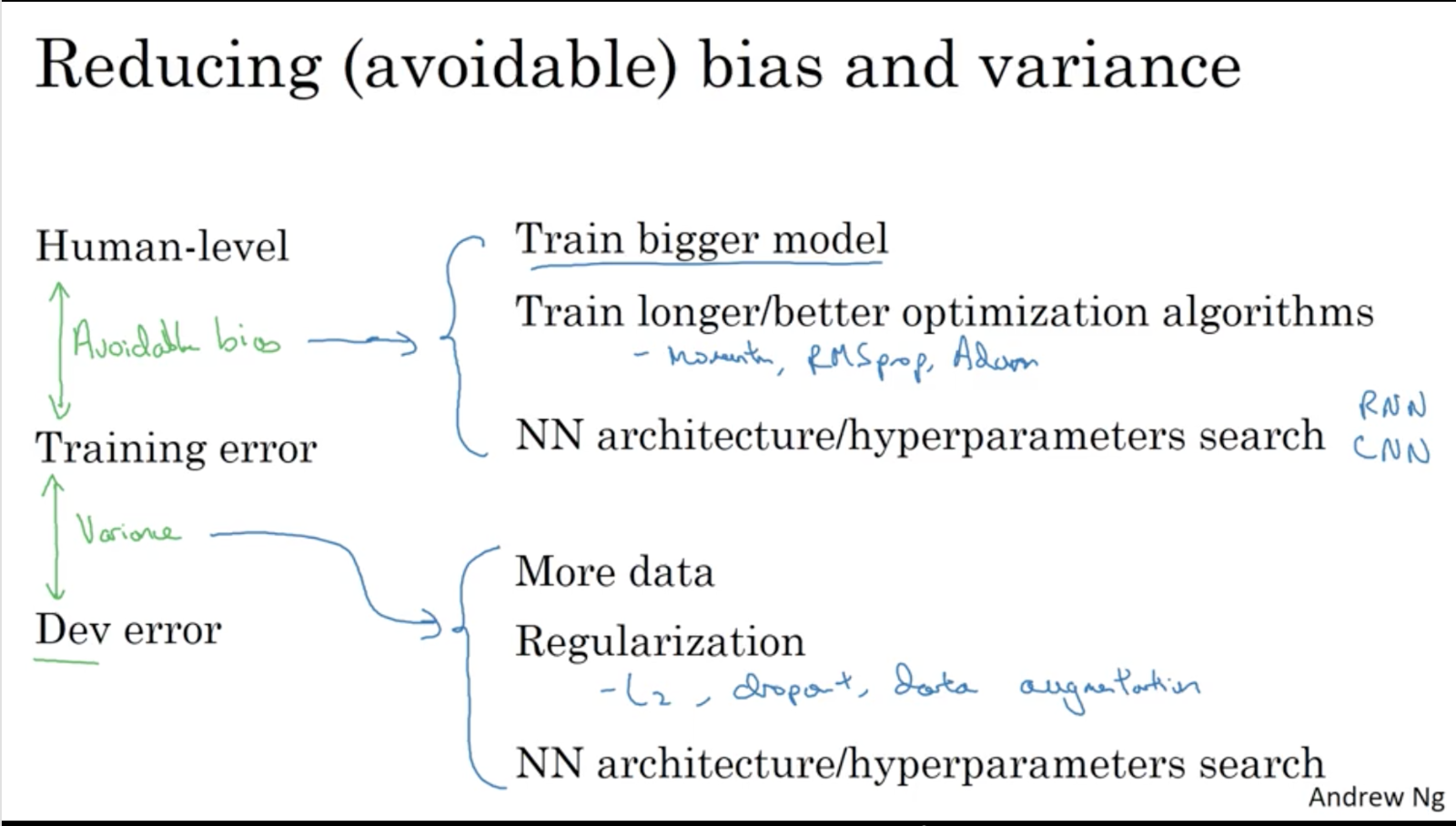