TL;DR here is the game I made for this game jam: https://juanuys.com/cargogame or find it on itch.io and in the interest of seeing the entire game, one can cheat by middle-mouse-clicking on the polyominoes to place them automatically

Our theme was randomly generated: 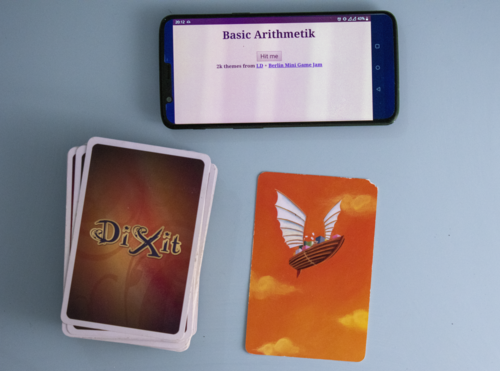 I decided to run with the winged boat and arithmetic ideas. Arithmetic for me means “puzzle game”. I prototyped a basic arithmetic mechanic the same evening.

However, I decided not to pursue this idea further, and opted for a “spatial arithmetic” approach instead. This involves optimally packing polyominoes on a board until there are no spaces and no overlaps.

Here is the game. The winged boat and the arithmetic combines in this way: you are tasked with loading up a ship with cargo (the polyminoes) before it can take off and deliver.

First and foremost, I wanted to make a finished game. Something playable from beginning to end. A puzzle game was going to rob me of “interesting decisions” (Meier and Noonan 2020), systems like GOAP (Orkin 2003), so it would be basic enough to achieve in a 2 week time frame.

In fact, I’m sure a puzzle game could be “more”, but do we run the risk of the game trying to be too many things?

I think, individually, those each could have been good games. Together, they fought with each other. You would have this mystery that you were trying to solve, then you would be facing this action sequence, and you'd do this cool action thing, and you'd get on the building, and you'd say, "What was the mystery I was trying to solve?" Covert Action integrated a story and action poorly, because the action was actually too intense.

I call it the "Covert Action Rule". Don't try to do too many games in one package.

Or perhaps I should just flip it around: a game about anything could also have puzzles in it (as a gate to progression). Next time, when “puzzle’ comes to mind during a game jam, I’ll let it not be the main course as I did in this game.

As many of my peers also noted, we want to learn something new, but perhaps not be bogged down for too long with tools we don’t know. (E.g. 3D modelling tools). I also brought down the gauntlet on any new tooling, and decided to use my usual suite of tools:

The one new thing I want to incorporate was a shader, especially to provide an outline to the polyominoes so they can be more easily discerned from the background. I got something working, but it didn’t look good enough, so I cut this “feature” to save time.

Shaders are definitely in my future, though. They’re everywhere in game development, and well worth spending time mastering.

Being a programmer, I had to make the polyomino solver myself. Programming is my catnip, but also my kryptonite, as I tend to stick with a problem until I solve it, much to the detriment of my sanity and my available time. And there were problems indeed (mostly due to my own hare-brained-ness). This foolhardiness is something which can bring a studio down, so I have to keep in mind to hire only the best programmers one day ;-)

The rest of it was smooth sailing, as I kept scope way down. The graphics were very basic and had a sketched-by-a-child look to them. The music tracks were basic, as I just layered some basic motifs using different sounding synthesizers. Given more time, I would push myself to be more creative in these areas (art and audio), but I wanted to be finished before the deadline (webinar on 2020-10-28).

I was done in time, and had a few days left for finishing touches:

I’m aware that for larger commercial games, one would start the marketing strategy at the same time as starting development, building up hype over time, and consistently teasing onlookers with screenshots and GIFs. (I have some literature on this topic stashed away for when the time comes.)

I didn’t push myself very hard during this jam. I just wanted to play it safe, go down well-trodden avenues, and be done in time (and not burn out half-way through the first course!).

I did, on the night of the theme reveal, participate in a very tiny ICEDIP exercise, but I did it all in my head and left Incubation for bed time, meaning I settled on the puzzle idea in the morning.

All the other ideas I had for the game (like the music, art, etc) just came to me without any ideation effort. I guess I had a cache/stash of ideas stuck in my head I wanted to try out anyway, but I never felt creatively stuck. (I’m definitely pushing myself more in future by participating in more frequent game james, or even going as far as “game a week” so I can get out of my comfort zone.)