I’ve started CalArts’ Character Design for Video Games and here are my course notes for weeks 2, 3, and 4.

I mash the last few weeks together, as they’re not instructor-driven, but interviews with industry professionals. In each week, each artist is given a challenge, then we spend many minutes watching them work (sublime!) while they talk about technique, design, the industry, and other war stories.

In this assignment I’d like you to expand on the previous assignment and try drawing two characters for a possible game. Maybe one is a hero and another is a villain. One could be a boss and another could be an underling. The challenge will be to give each character a clearly different design.

You can draw your characters in a complete pass, or you may want to try Andy’s approach of drawing many sketches for your character, and then combining the pieces you like into one design, by cutting or tracing your drawings.

In addition to your two characters, upload a short paragraph that describes your characters, their context (ie. the game) and your approach in designing them.

The Mech is the good guy. The Wizard is the bad guy. The wizards come from an Enlightened future where machines don’t exist anymore, so they came back to the modern day to put an end to all machines. However, modern day AIs (artificial intelligence) saw this coming, and prepared an army of mechanised warriors (Mechs) to fight against the wizards.

To be honest, this is a game I’ve just come up with on the spot. Also, when I draw the characters, I just let it flow. I didn’t have any big ideas for characters, so I ended up with a man and a robot. 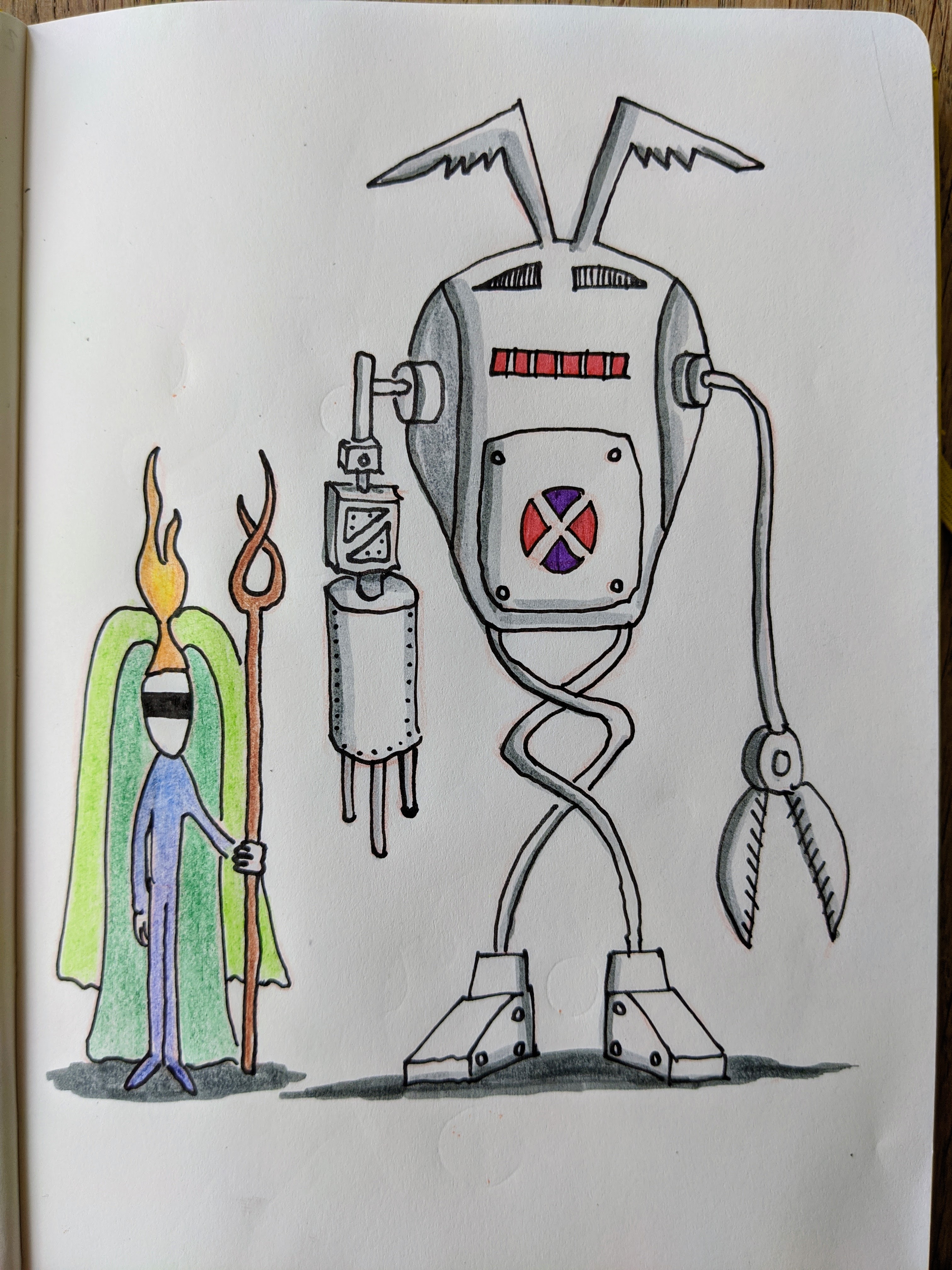 This assignment asks you to examine and consider the characteristics of existing characters and styles that you’ve found inspiring and adapt them to different styles. The goal here is to discover what makes characters recognizable and unique, and how changing certain elements can make them fit into a new world.

First, select two characters from a game, show or movie that you like.

Then, re-design them to fit the context of a different game, show or movie.

Additionally, you must include a short paragraph that describes your characters and their original source/context, and the approach you took to adapt them to the new context. Please include a link that shows your original source characters, and a link that shows the world you’re adapting their designs to fit. These links will be helpful for the people reviewing your work, just in case they aren’t familiar with your source characters or your target world.

The left side image is inspired by Geralt of Rivia from the Witcher world. Geralt is so bad-ass, I wanted to make him cuter. So, I turned him into a cute, stout, stubby little man. My inspiration was the stubby old man from the film Up. There were some interesting monsters in the later part of the film, and Geralt could almost be seen as a resident hunter.

The right-side image is inspired by Pikachu. Please note that I drew the original Pikachu just for fun and comparison - please don’t deduct points because I did this. My adaptation is called Robochu, and I was inspired by Macross. I think Robochu will make for a formidable mech warrior, with it’s electric superpowers. 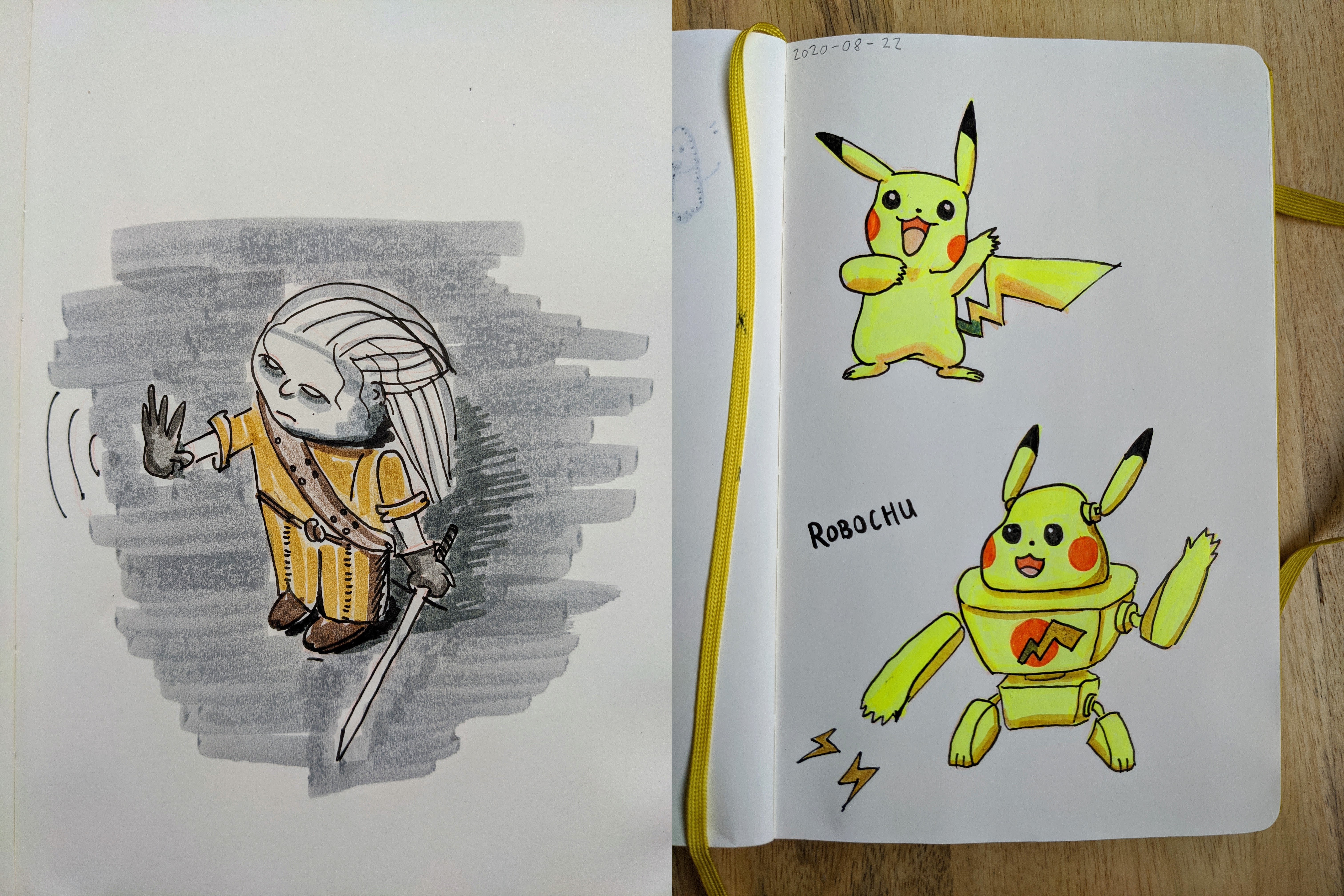 In this assignment you are asked to draw three different versions of the same character, but with a twist: you must use a real object as inspiration for your designs.

Please do not choose another video game or animated character as your inspiration—look in your environment for something more unexpected.

Take some photos or sketches of your inspiring object, and then try three takes on the same character and see how it goes. Upload both your inspiration and your three designs as two separate images.

You must also include a short paragraph that describes your character and your working process (what you found interesting in your selected object, or how the object changed the design).

(Again, I made a mistake and was supposed to find ONE source of inspiration and draw 3 different renditions of one character, but instead I found THREE sources of inspiration for the same character. Again, I guess I’m offering my peers more variety this way!)

My protagonist in my Jones game is trying to get on top, but runs into the Mob.

I found all 3 images completely randomly by going to an image-randomisation website.

Sorry, I just realised we have to find only one inspiration and draw 3 characters from the one inspiration - please don’t deduct any points! In fact, one could argue I’ve done more ;-)

One obviously learns a lot by watching professionals work, and I’m not going to summarise it here. I’d have to go and watch all the videos again and transcribe it literally, and I’d rather just listen to them talk while I’m doing my own sketching (which is what I did!)