A Night At Locke Manor

A Night At Locke Manor

A Night At Locke Manor is the title of the game we made for the IGD740 assignment. As the course was focused on the business side of gamedev, I took the prototyping mindset to developing the product, with a view to deliver something which can be used as part of a pitch to convince funders to give us money to turn the idea into a game.

As such, the game didn’t need to be a full game, but could rather get away with being elaborate smoke & mirrors (Unity 2018).

For this reason, I didn’t immediately reach for my game engine of choice, but rather made a mod using an existing engine which already specialises in the escape room experience, called Escape Simulator by Pine Studio (2021).

At the beginning of the module, I floated the idea with Maciej that I should make a gameplay prototype and that he should make an art prototype (Macklin and Sharp 2016: 184-199), because that would decouple us more and allow us to each flex their strongest skills (mine, development and design; his, art and visual design) without being blocked by other members of the team at any point (Shell’s prototyping tip #5: parallelise prototypes productively (2019: 110)).

Note that the below documents are just copies of said documents at the time of writing this post. The submission via the uni portal would include all the latest copies.

The reason our social media presence only includes Twitter, and not the myriad of other offerings (like Youtube, TikTok, etc), is because I’m on Twitter, and it’s the channel I feel most comfortable using. Also, as solo gamedevs or small studios, we’ll be quickly overwhelmed by community management and marketing tasks, which will leave no time for actually making games (Jonas Tyroller 2019: 11:37).

For the press kits, everyone kept recommending Rami Ismail’s presskit() to me (Ismail n.d.). It is a PHP file, however, and I don’t host a PHP site. I ended up making a tool called presskittie() that allows you to generate a static version of the press kit locally, and then optionally deploy it to Github pages (Uys 2021). With Rami’s blessing, I shared the tool with my cohort, and more widely:

Need a press kit for your #indiegame but don't have a PHP website?

I wrapped @tha_rami's presskit() up in some fur over herehttps://t.co/MNOl3zT2eg

Firstly, I wanted to know about all the different puzzle types one could conceivably implement in a video game. From my own experience with games, I first came up with my own list:

Then my search expanded, and I found a a bunch of useful resources, for example:

I spent the next few days/weeks immersing myself in the above resources.

Secondly, I set myself a goal to achieve with the game prototype, which was to make the game so intuitive, that the players will know exactly what they need to do just by playing the game, and have a clear mental model from the get-go (Macklin and Sharp 2016: 93-95).

Before building anything, like implementing the level, placing all the objects (locks, keys, etc), and linking them (i.e. which cards activate which slots), I designed the puzzle using Miro (“Miro \Textbar Online Whiteboard for Visual Collaboration” n.d.). This gave me a good overview of how many keys (or Tarot cards) I would need, and how long it would take me to implement the level.

In general, I find going straight to pen & paper, or a tool like Miro, invaluable to structuring my thoughts before blocking anything out in a game engine. I was inspired by this “off-line” process years ago (back in 2007) when I learnt of the film Shoot ‘Em Up, in which writer and director Michael Davis sketched out entire animatics of the film and pitching the film as sketches via iMovie (Davis 2015).

At first, I designed a more elaborate puzzle, which you first have to find a key hidden in a book, and then that key unlocks a box containing a subset of the Tarot cards (see screenshot underneath). However, I simplified the design to just be a handful of cards scattered about the room, and 8 of those cards fit in one lock, which reveals the final key. 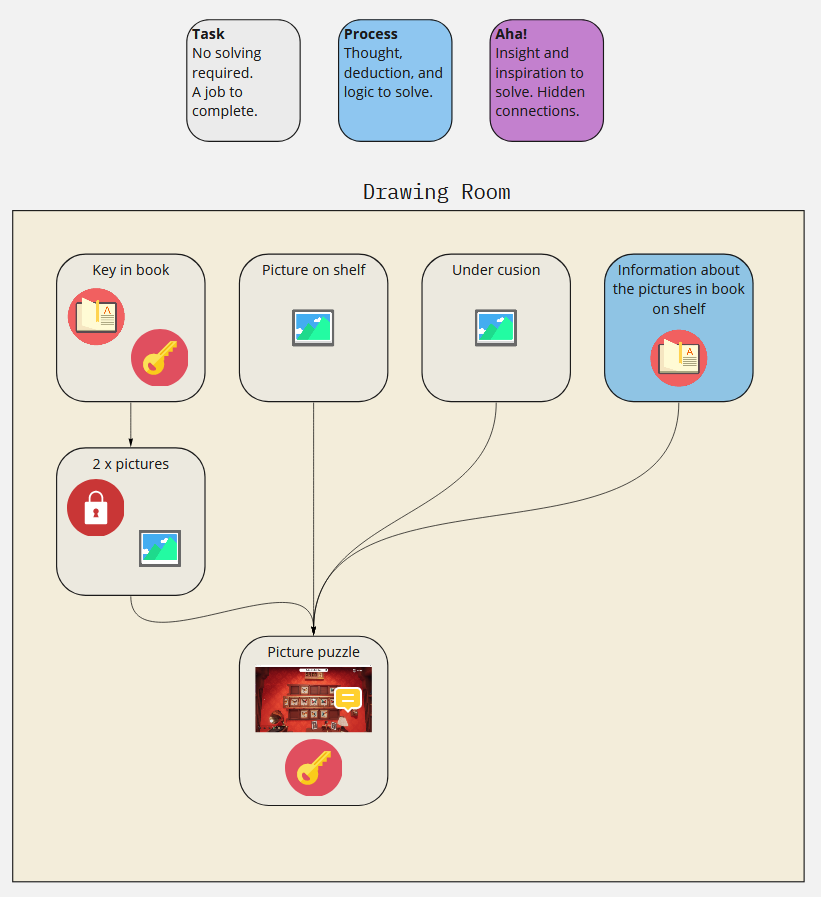 I tied the Tarot cards to individual notes in the world, to be found by the player, and the writing for the notes was to serve as clues for the player so they know which Tarots to use, and in which order to place the Tarots.

Apart from building a level in Escape Simulator, I did some light modding by retexturing some of the objects. Some of the textures can be seen here: 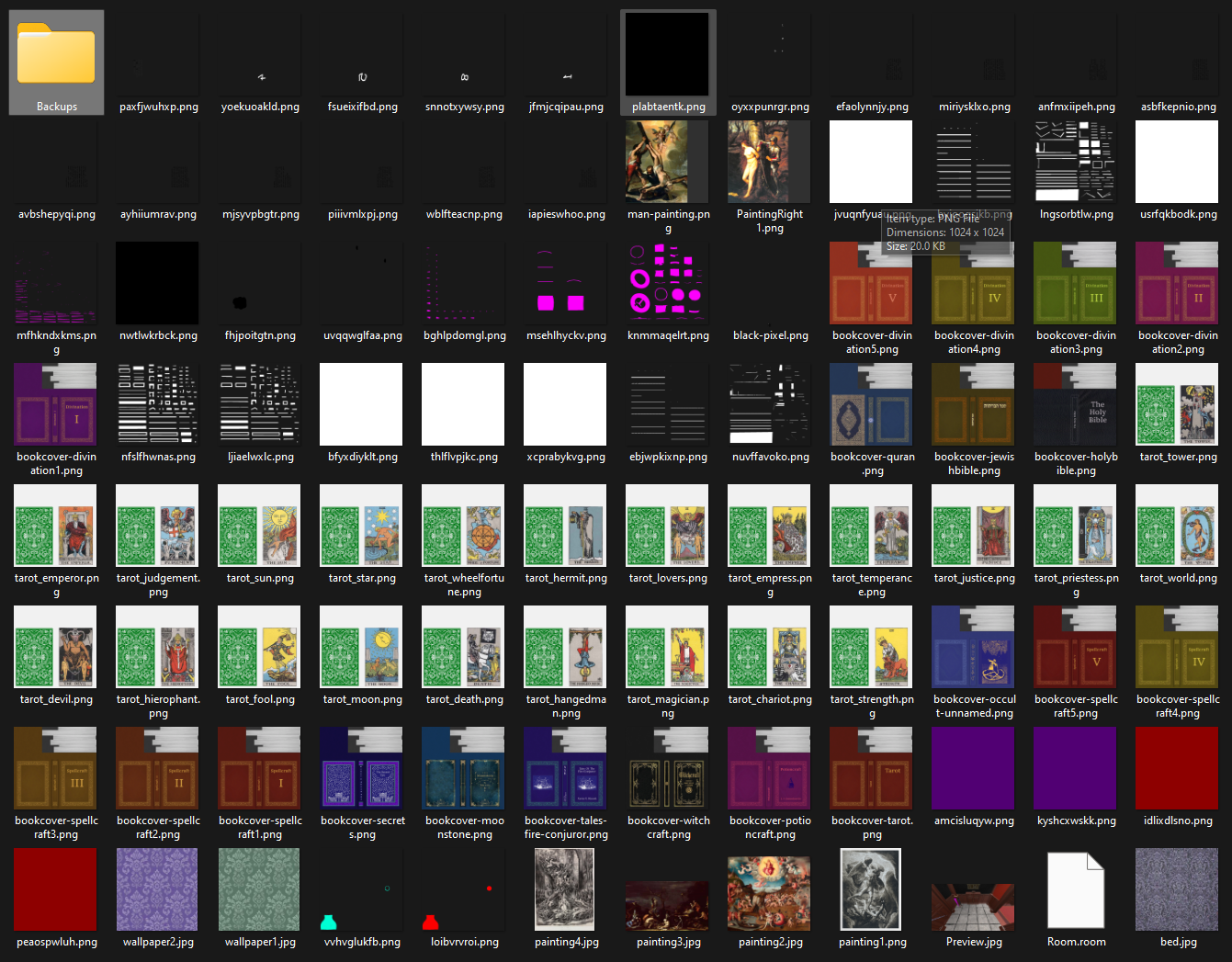 The modding engine had some limitations, in that you couldn’t have custom sound, lights, or objects. (All these are planned features, though.)

I couldn’t quite create the ambience I wanted to, but this was fine, as I only wanted to validate the gameplay.

To help me reach my goal of making the game intuitive just by playing it, I employed some family and friends as playtesters. After a couple of playtesting sessions, I think I reached a point where the start of the game is quite clear about what’s happening, and what you’re supposed to do. In fact, the game starts with you facing the door head-on, with a note stuck to the door explicitly telling you that this is the way out, and that the key is in the box to your side.

I then go on to show one of the Tarot cards already slotted into the device. The card is interactive, and you can pick it up.

I scripted and recorded the first 3 minutes of our gameplay video, which is available here: 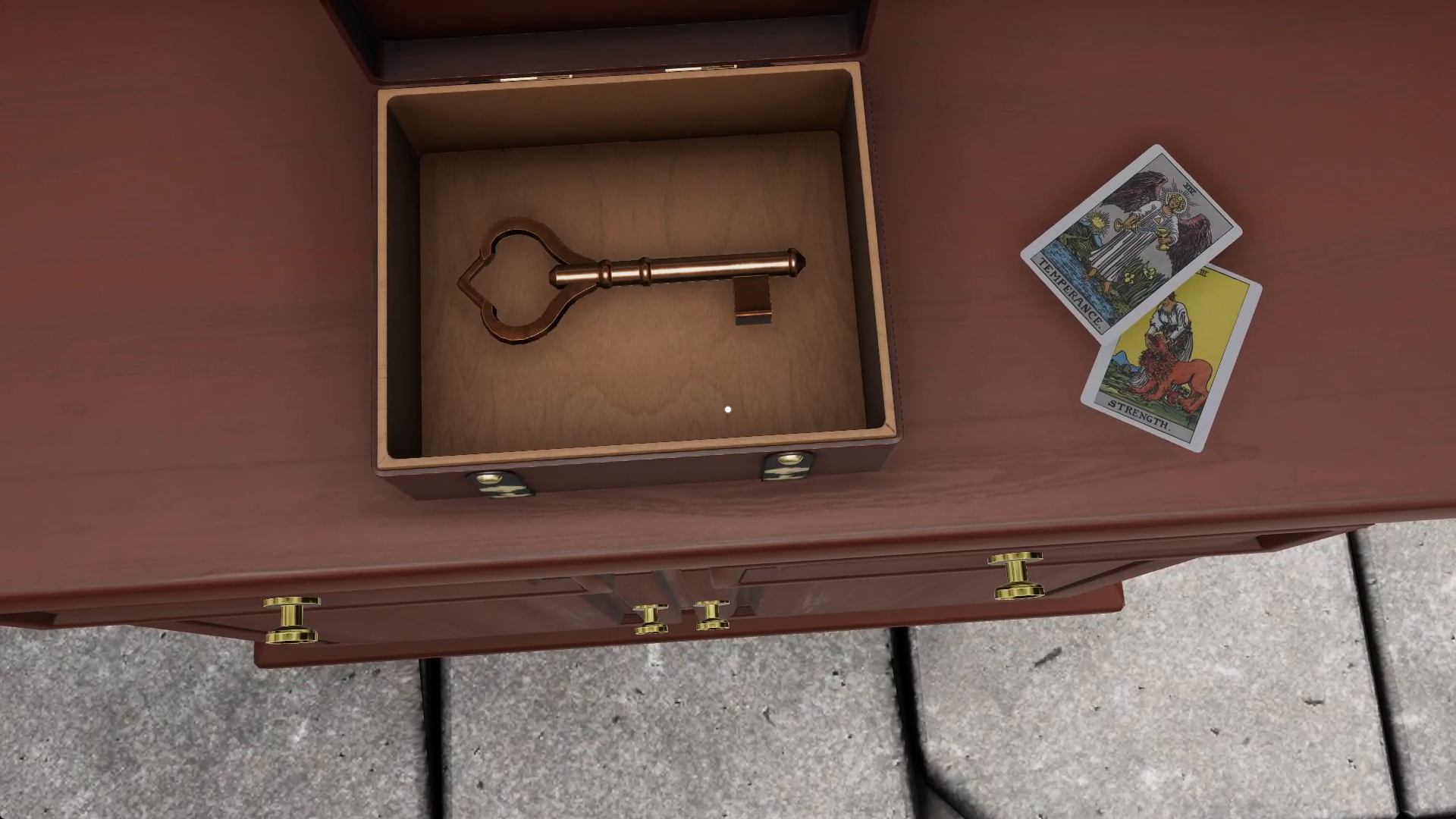 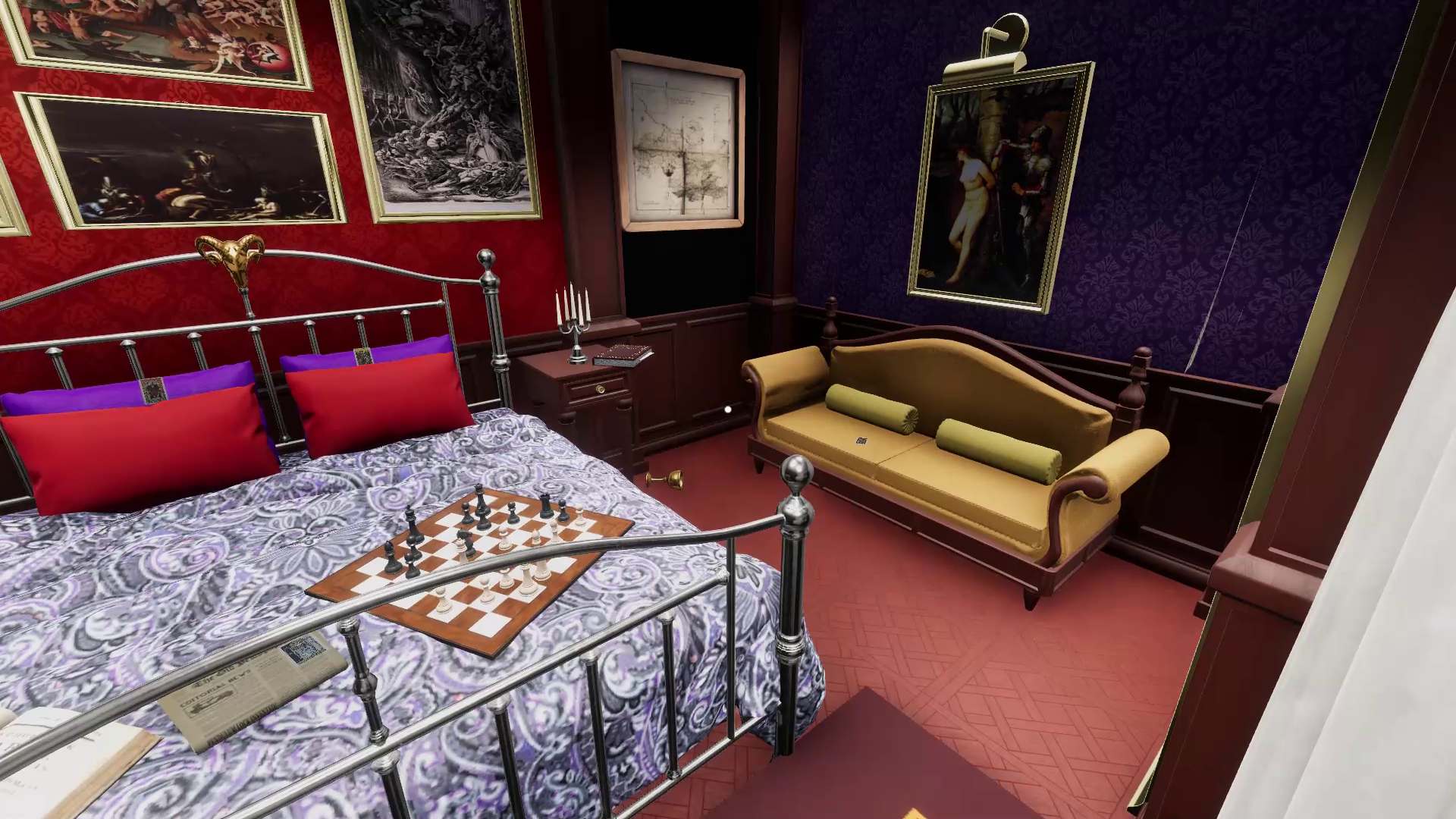 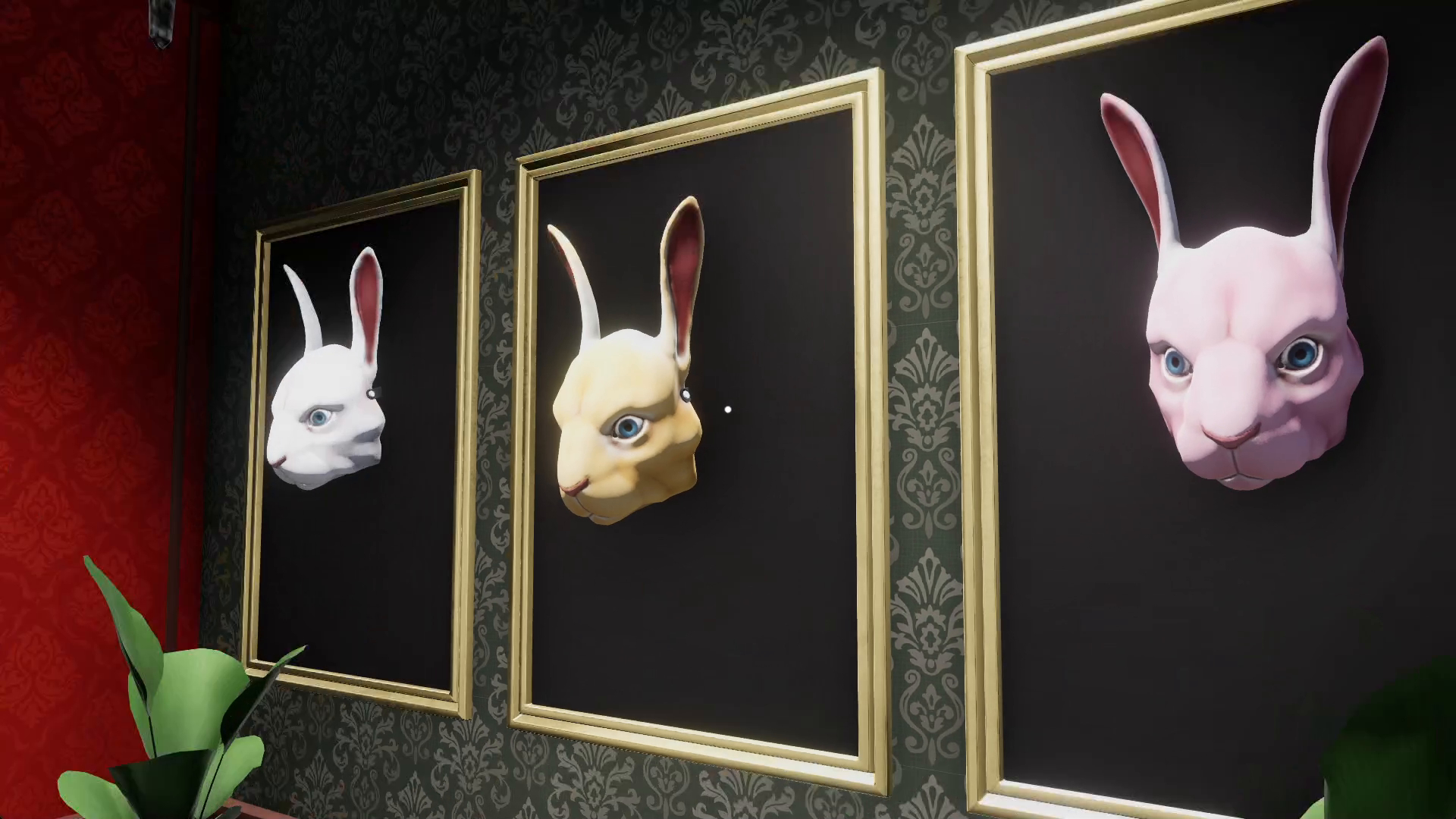 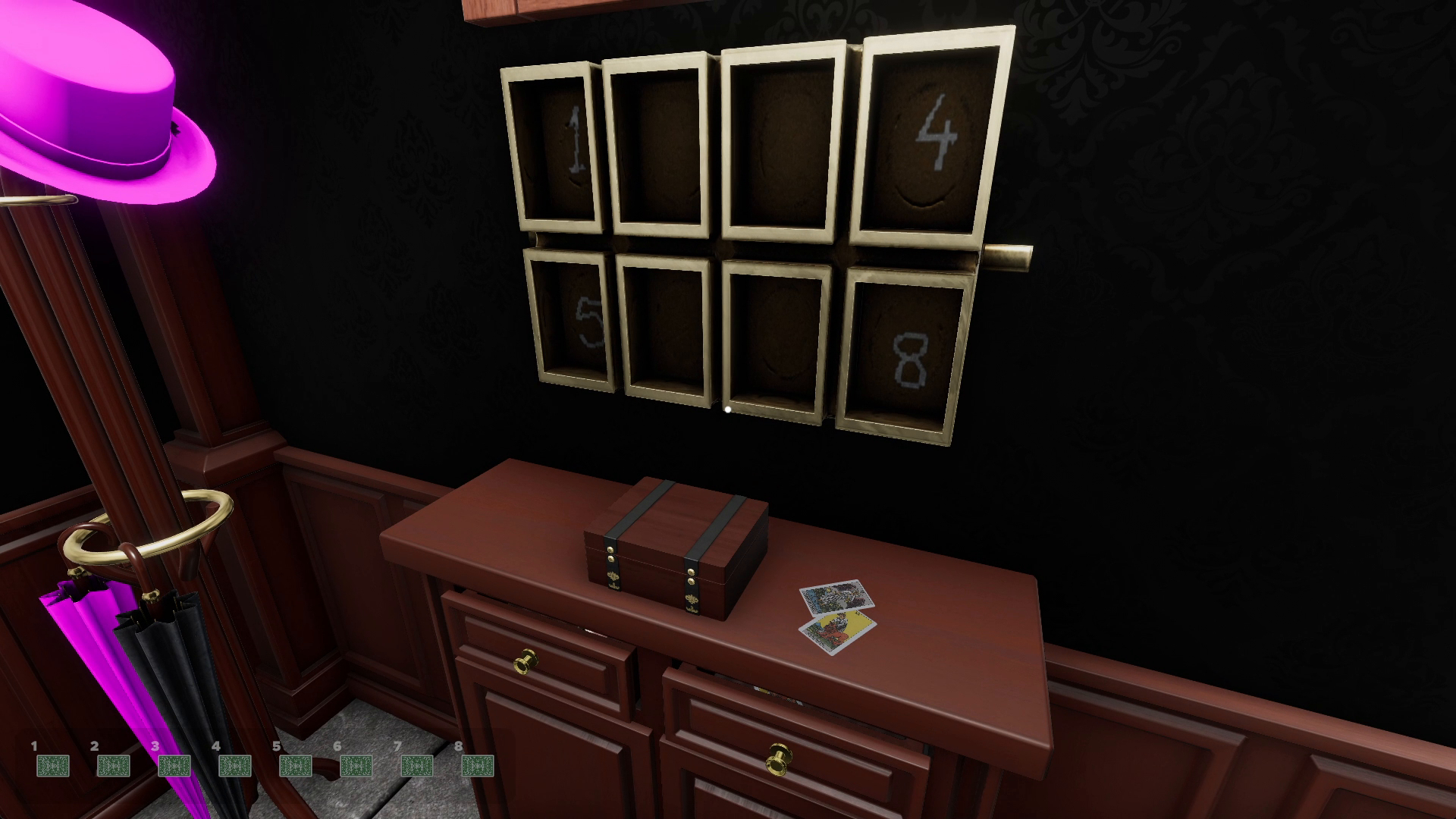 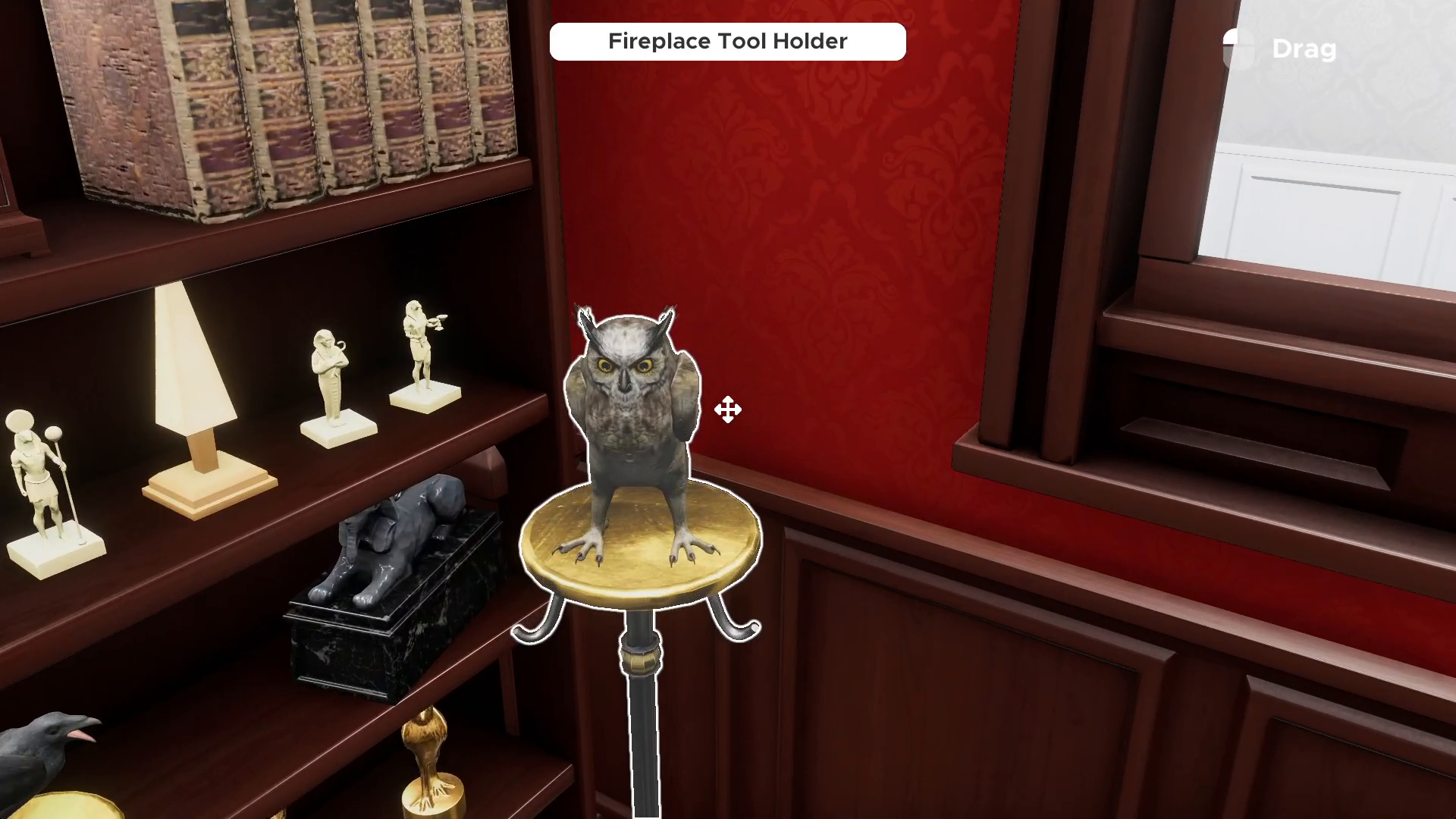 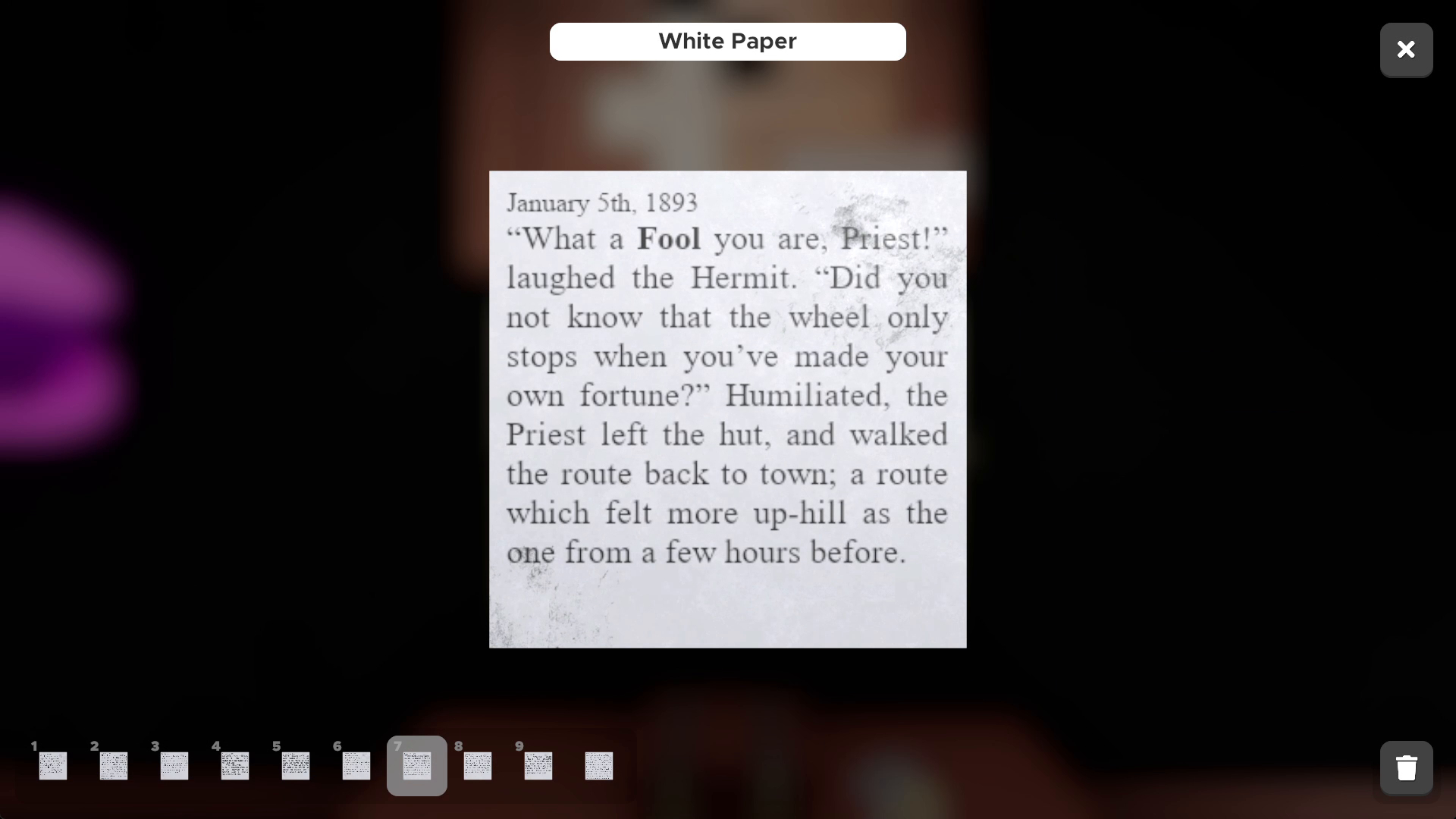 For the press release, I tried to find the most recent best practices about wording and layout online. I mixed and matched pointers from Aaron Marsden (2018) and Alexis Santos (2018), but in the end made sure that I communicated all the most important information:

For the Steam page, I took all my pointers from Chris Zukowski’s free course on how to make a Steam page (n.d.). These include:

Wlad Marhulets recommends you choose a social media channel that you’re on already, that you’re comfortable using, and where you know the tone of voice (2020). The last thing you must do is take the same message, and post it on every social media channel. Your message will come over as flat in most places, and you’ll just end up getting ignored.

As an indie, I don’t have much time, so will be foregoing all the channels which require too much work, like video creation. That includes Youtube, TikTok, etc.

As I’m already on Twitter, I decided to create a presence there: https://twitter.com/untitled__team

Please follow that account to see all the tweets, as they are currently protected. The snapshot I shared at the start of this post won’t show any animated GIFs.

Conversely, for future games, I will definitely experiment with other channels, as I discovered quite recently that Twitter consistently doesn’t work for a lot of studios, and that it’s mostly an echo chamber of gamedevs (Zukowski 2021).

We went in-depth on pitching in the previous module, so I won’t re-iterate my learnings and research here. Please see that blog post for more information and the relevant citations.

Most resources on making game trailers point to Derek Lieu’’s website (n.d.). Some of the pointers include:

There are many more guidelines and some “rules”, but in the end, these are meant to be broken, and you’re meant to be creative, otherwise all trailers would feel the same.

I made the trailer and gameplay video using a free one-week trial of Adobe Premiere, as the Mac and iMovie I usually use is getting very old and slow. I initially tried Blender’s video editing capabilities, but Blender’s engine is quite old and doesn’t benefit from GPU-powered hardware acceleration like the more modern offerings.